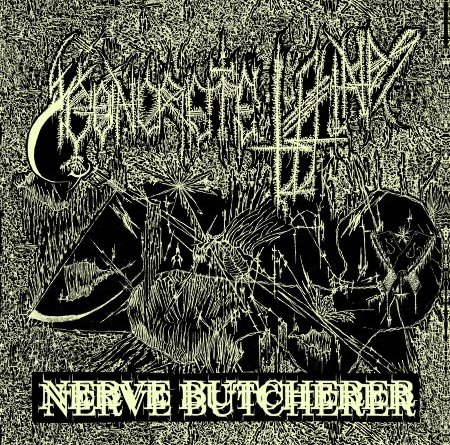 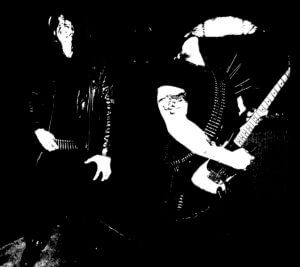 Only dedicated devotees of the darkest arts would dare try to pack as much frenetic violence into 27 minutes as Concrete Winds have successfully crammed into their punishing sophomore full-length, the aptly-named ‘Nerve Butcherer’, a truly jaw-dropping affair which erupts unapologetically from the barrel with the suitably frantic, disjointed, crushing title track, all barbaric muscle and sonic vehemence, setting the tone with a viciousness and ferocity reminiscent of the mighty Revenge.

Warp speed is the order of the day as the equally-intense ‘Chromium Jaws’ bares its ravenous teeth, rabid vocals shredding, manic drums pummelling, guitars performing all manner of unnatural gymnastics, searing, ripping, grinding, the combination of all these disparate yet weirdly compatible ingredients baying for blood, heralding pain and torture. To be fair, the music on this album arguably makes no sense on any level whatsoever and that’s why it is so endearing.

Frayed and sharp riffs, rapid-fire, truncated solos, sick screeches and unholy utterances abound, rendering ‘Nerve Butcherer’ a decidedly challenging and difficult listening experience and one is flirting with exhaustion by the time the fourth volley, ‘Industrial Mutilation’, rips through the speakers and eradicates the ether. But there is no desire to give up as this particularly potent breed of insanity is utterly infectious and onwards we journey into complete Death Metal madness, each ensuing succinctly-named, two-worded short sharp shock to the system more compelling than its predecessor.

At no point is ‘Nerve Butcherer’ anything other than discomforting and overwhelming. Concrete Winds have no interest in producing palatable, processed, same-sounding mediocrity. Instead, they focus on injecting endless audial annihilation into each and every second of a record that remains gloriously inaccessible and unhinged from start to finish. The album is confidently consistently strong, too, as opposed to front-loaded, the closing triple onslaught of ‘Paroxystic Flagellator’, ‘Dissolvent Baptism’ (an epic ejaculation by Concrete Winds standards at almost five minutes) and ‘Astomatous Vomiting’ as ugly and uncompromising as anything that went before.