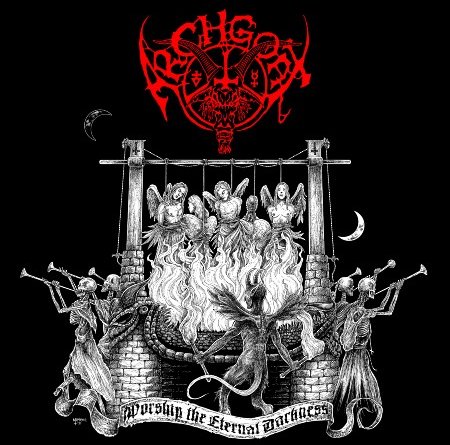 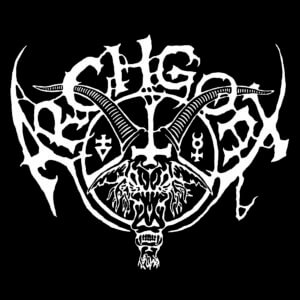 Perversion, decadence and auditory molestation abound across the 42-minute duration of ‘Worship The Eternal Darkness’ as Satan’s inimitable servants Archgoat add to their disgusting discography with their latest overtly sacrilegious blast of goat-worshipping, nun-defiling darkness, the filthy Finns’ fifth full-length demonstrating that more than three decades into a thoroughly blasphemous recording career they have shed none of their supreme Satanic might. Archgoat dwell so far down the left hand path today that they stand almost peerless in an (embarrassingly) increasingly-inoffensive Black Metal ‘scene’, where the very adversarial spirit and non-conformity that made this subgenre so compelling in the first place has been all but forgotten.

Archgoat have not forgotten, however. Nor have they compromised. Thus, ‘Worship The Eternal Darkness’ represents the blackest of perverted affairs that is rendered gloriously ritualistic by the band’s tendency to drop pace at will and conjure the most devoutly depraved sonic atmosphere imaginable. Whether they are pummelling and crushing with immense power and intensity or enchanting and enticing with slower, more measured (and paradoxically more disturbing) moments, Archgoat invariably inject unease and naked horror into their music, which simply reeks of evil and unswerving devotion to dark desires and intentions.

The songs may not be overly long but they are strangely anthemic because Archgoat possess an uncanny ability to craft music that is instantly recognisable, infectious and memorable. The majestically malign ‘Empyrean Armageddon’, for example, will have you nodding your head in sadistic approval, followed instantly by the debauchery of ‘Blessed in the Light of Lucifer’, then the title track itself – prime Archgoat bristling with nastiness and deviancy. When the tempo slows, the intensity increases leading into an outburst of unrestrained orgiastic adulation at the altar of debauchery. Meanwhile, the ominous splendour of ‘All Christianity Ends’ is a corrupted joy to behold.

Having honed their devilish craft to nigh on perfection, Satan’s long-serving acolytes close proceedings with the doomy-but-depraved funereal crawl of the gloriously rapturous ‘Burial of Creation’, providing further evidence of their versatility and mastery of the blackest, darkest moods, tones and emotions. It’s impossible not to be impressed and difficult to resist the urge to give the album another spin immediately. ‘Worship The Eternal Darkness’ comes as a welcome reminder of how trailblazing and unique a force Archgoat is within an otherwise largely stagnant Black Metal underground.