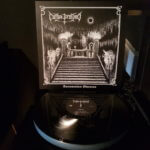 Before the masses began jockeying injudiciously for acceptance and acclaim on social media and the realities of our existences became distorted beyond recognition, distilled into an endless succession of pics and updates and arrogant, self-serving, attention-seeking posts on Snapchat, Facebook, Twitter, Instagram or whatever the latest cyberfad is, true Black Metal seemed to emanate from subterranean realms, appearing to be more dangerous, mysterious and beguiling.

The shroud of mystique has been well and truly removed but at least bands still come along every now and then who somehow sound like they have been transported via time machine from that erstwhile era when we naively believed (or wanted to) that Black Metal musicians were demonic entities, possessed by some dark force (rather than just normal people like me and you who eat and shit and snore and bore their partners to death with talk of money and holidays and house fittings and shopping).

One such outfit is Cultus Profano, a Los Angeles duo, who have tapped into the mighty olden days on their rather evil and bewitched debut full-length, ‘Sacramentum Obscurus’. This is a great slab of nasty Black Metal, befitting this age of abhorrent people and their ignorant, stupid, ego-driven ways. Bring them to the sanctuary and slit their throats and let the naves run red.