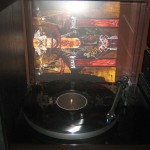 I love the original concept behind Death Karma’s debut full-length, which looks at various occult burial rituals historically practised by different civilisations around the world during times that were almost as insane as the ones we now dwell in.

It’s a unique and refreshing form of macabre reflection, even by Black Metal standards, and ‘The History Of Death & Burial Rituals Part I’ certainly deserves top marks for being innovative in the creativity stakes.

From the ‘Hanging Coffins’ which once protruded from cliffs and walls in China to India’s ‘Towers Of Silence’, Madagascar’s dance with the dead (‘Famadihana’) and Mexico’s chilling town where the deceased were bathed in blood (‘Chichén Itzá’), this is truly morbid and fascinating stuff.

On the other two tracks on offer, the Slovakian duo deal with matters closer to home – ‘Journey Of The Soul’ acknowledging an ancient burial custom in their native land and ‘Úmrlcí Prkna’ referring to an area in next-door Czech Republic (where the band members now reside) whereby expired fuckers were kept on hold until the harsh winters had passed so that they could be buried in the spring time.

All in all, the theme of the album is a great idea and quite rare in that this is a dark release that is genuinely interesting and referring to real events rather than Satan and Lucifer and chaos and that sort of stuff. Sonically (hell, I might as well mention the actual music…), ‘The History Of Death & Burial Rituals Part I’ is also excellent – what else would you expect from two members of the band that produced one of the best LPs of 2013?!

The record itself is contained within a spectacular gatefold jacket, with beautiful artwork and a lovely booklet stapled to the inside, including lyrics and artwork. Brilliant stuff all the way and a truly stunning follow up to the promising ‘A Life Not Worth Living’ MLP.