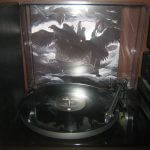 I’m not sure exactly what criteria Deathspell Omega deploy to determine which of their releases qualify as full-lengths and which are mini albums (nor indeed is it any of my business) but the first thing I noticed about their sixth album proper, ‘The Synarchy Of Molten Bones’, is that it is by far and away their shortest LP, passing by considerably quicker than even the magnificent 2005 offering, ‘Kénôse’, which was apparently an EP.

This one was first mooted as a new MLP but somewhere along the way, ‘The Synarchy Of Molten Bones’ became a 29-minute, four-track full-length. Considering that the epic ‘Si Monvmentvm Reqvires, Circvmspice’ is almost 78 minutes long, this latest effort is disappointingly short, even if obviously quality rules over quantity. Why can’t we have both, though?

As ever with these theologian trailblazers, the quality is of course beyond dispute but the record – which plays at 45rpm – is over way too soon. Especially considering that it had been a full six years since its predecessor, ‘Paracletus’. Maybe the well of inspiration has dried up somewhat and they didn’t want to include any filler or flog a dead horse, who knows? As things are, we get a short but sweet reminder of the brilliance of Deathspell Omega.