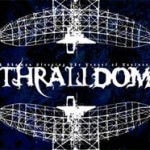 Regretfully, Thralldom announced that the splendidly-titled ‘A Shaman Steering the Vessel of Vastness‘ was to be their final release – but what a devastating note upon which to flee the scene! As a parting shot, these USBM weirdos delivered their career highlight in the shape of a stupefying seven-track rollercoaster ride of exhilarating black magic/art. Thus it can be said that the brains behind the two-man project – Killusion and Jaldagar – have committed musical hari-kari.

My vinyl version of ‘Black Sun Resistance‘ was in a perilously frayed condition when this one landed in my paws in March 2006, so you can probably imagine the enthusiasm with which I greeted the advent of this latest fix from one of the most obscure and unappreciated bands operating within the shadowy netherworld of underground metal. So, is it any good? Did Jesus squeal when the first nail went through his wrist? Of course.

With each listen, the final instalment in Thralldom’s legacy reveals itself a little more, working its way into your mindscape, battering your senses and redefining all conceptions of what Black Metal can – and should – be. Profound Lore Records packaged the CD in a novel and practical slimline digipak encasement, complete with tasteful artwork, liner notes and even lyrics. The latter are abstract and wordy, epitomising Thralldom’s multidimensional existence.

This is not standard BM fare, though the influence of early Darkthrone can be strongly detected. Thralldom inject industrialised, artificial additives into their serum, with samples, droning sounds and all manner of unidentified noise sources called to arms. The result is gloomy, oppressive, and harsh. Thralldom were never afraid to push the boundaries anyway and this release contains a typically experimental lilt. For example, sixth track ‘Narrow Road‘ is an acoustic guitar based ode to the ongoing decline of American civilisation. I think.

I would strongly advise curious parties to snap this up by hook or by crook. I believe the vinyl version could still be available. If not, make your voice heard and demand a reissue!

Thralldom’s untimely and cruel demise with this release is poignant. Real heroes never return from battle. They are the ones who selflessly place themselves in the frontline, risking life and limb, and invariably get mown down in a hail of bullets or cut to ribbons by a landmine. They never come home to a fanfare or a hero’s welcome. Instead, they remain forever uncelebrated and unknown. If the wars against Christianity and humanity are one day won, the insincere will gather to lap up undeserved adulation for a victory that they did not contribute to, while Thralldom lie in an unmarked grave.