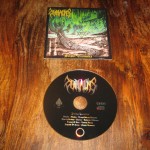 Spanish band Domains conjures hereon ten tracks of cavernous old school Death Metal that should appeal greatly to fans of celebrated European acts like Pestilence and Asphyx in particular. As well as being uncompromisingly true to the genre it celebrates with gusto, ‘Sinister Ceremonies’ is also very melodic and easy on the palette. To my ears, this is perhaps what Behemoth might sound like if Behemoth weren’t a total fucking joke these days.

I’d prefer if the attention-seeking solos weren’t included but, hey, maybe my thinking isn’t in line with the true spirit of ancient Death Metal performed the way it was originally intended to be? Either way, this is a very accomplished and impressive debut full-length from a collective that has no doubt already amassed something of a cult following. Solos apart, it is hard to have any real issues with the artists or the art…

The CD includes an eight-page booklet replete with lyrics and, all things considered, this is a really cool underground Death Metal offering (even if it is excessively melodic). (I know, I am one moaning motherfucker.)