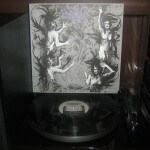 ‘The Grand Sabbath’ has a lot going for it: for starters, Doombringer’s debut full-length boasts an interestingly-varied vocal approach (which works especially well on ‘Children To Moloch’ at the start of Side B, for example, but is evident throughout); the seven tracks are expertly executed by veterans of the verdant Polish underground, with a running time of 43 minutes; and the vinyl edition looks and sounds fantastic (heavy duty cover; booklet included with lyrics).

The record also defies any simple, throwaway categorisation as it stirs a number of styles into its complex potion. Eight parts Death; one part Black; some other (mostly) dark shit as well… It’s got an excellent production and is ghoulish, heavy and relentless as all fuck for the most part – but is let down at times by some unnecessary and annoying solos / melodies.

Even though it is an impressive work, overall I find that ‘The Grand Sabbath’ suffers a little from what one might call a jack-of-all-trades-master-of-none syndrome. It’s certainly impressive but it also has an identity crisis and is neither one thing nor another in the end. Or perhaps that’s just me trying to come up with a reason why I like the album but don’t love it?