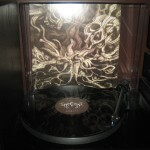 Esoterica is one of those artists somehow preordained to forever fly beneath the radar. While some bands (more often than not, undeservedly so…) attract hype, acclaim and column inches like shit does flies, others never really get much of a mention anywhere. Here is one such act and it is of course an injustice. If it wasn’t, I wouldn’t bother mentioning it…

The debut full-length crept out in 2013 and emerged on vinyl some four or five months ago. Bet you heard fuck all about it! Nor did I. But seeing as I thoroughly enjoyed the previous incarnation of Esoterica, Chaos Moon, and also appreciate the vast majority of the myriad other bands this trio is associated with, I decided to check it out.

Bought the CD edition on Forever Plagued for a pittance first and this was impressive enough to merit investment in the record (which I also rather fortuitously sourced at half price). Even though the atmosphere at times veers too close to shoegaze for comfort, ‘Aseity’ is nevertheless a very unique, obscure and interesting journey.