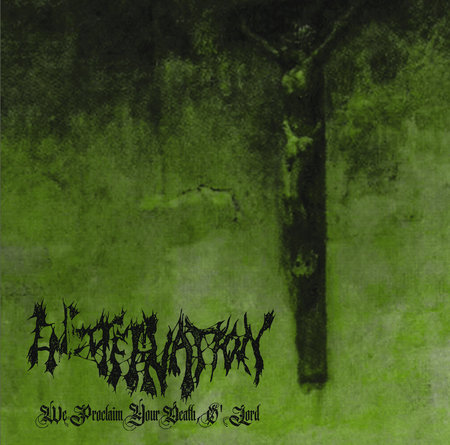 It’s a decidedly sluggish, laboured, drawn-out demise indeed for o’ lord at the hands of Encoffination, the masters of morbid slow-motion Death Doom, whose fourth full-length represents another worthy addition to a potent, devastating canon. A decade has passed already since this dastardly duo, merging the nastiest of nostalgic Death Metal with the relentless agony of Funeral Doom, announced their arrival at the world’s wake with their exceptional debut album ‘Ritual Ascension Beyond Flesh’.

Since then, Encoffination have held a special place in the darkest corner of my heart, invariably delivering slow, crushing Death / Doom of the very highest calibre across a steady succession of albums, splits and EPs. Life is something that nobody earns or deserves; it’s just bestowed upon us by chance. Death is different: it’s as fitting as it is inevitable. Every breath we take marks a move closer to the grave. Thus, life itself is no more than death slowed down, a process captured in all its wonder on ‘We Proclaim Your Death, O’ Lord’.

Slower than rot and heavier than a fat man’s coffin, Encoffination’s tortured crawl towards the tomb is more elegant and beautiful than any burial. This is the embodiment of art encapsulated in music. Another incredible funeral arrangement from the other side (although, ironically, I wish the album was longer…). We’re all dying here and Encoffination’s graveside monoliths provide the perfect soundtrack to the emergence of the nothingness at the end of everything.