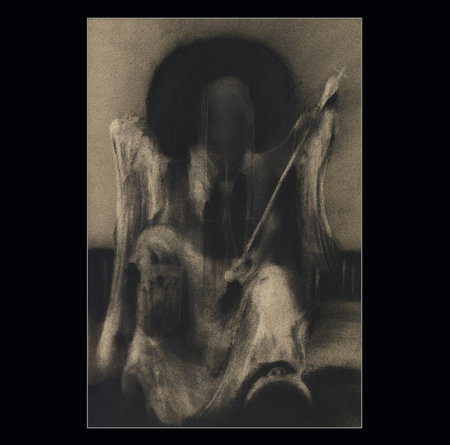 Dwelling decrepitly, surreptitiously within the hazy twilight betwixt Death Metal and Black Metal, Amnutseba are not in any immediate danger of dying of loneliness, such is the (mostly welcome) proliferation of mysterious, shadowy, anonymous cloaked crusaders emerging from the chaotic crypt of neither one thing nor the other to disorientate us with their devilish dissonance.

On debut full-length ‘Emanatism’, the unfathomable French faction demonstrates an uncanny ability to straddle these two dark subgenres with tremendous ease, delivering over the course of 36 swarming minutes a nightmarish maelstrom of jarring discord and irregularity, deliberately indecipherable, consciously murky, caked in a dirty production that suffocates, inducing claustrophobia and dis-ease in the bedraggled listener, a blessed din that those amongst you who appreciate similar acts like Irkallian Oracle, Grave Upheaval, Portal and Malthusian will readily appreciate, while also apparent are very strong nods to the complex jazziness and mathematical structures of compatriots Deathspell Omega as well as traces of Rebirth of Nefast’s innate orchestral ambition and might.

Building confidently upon the brilliant demos that were collated by Iron Bonehead for the excellent ‘I-IV’ compilation a couple of years back, ‘Emanatism’ is an anguished slow burner, which is in no rush to reveal its devastating magical components, patiently seeping into the ears and soul of those exposed to it, building to a frightening crescendo of utter derailed, unhinged madness that runs riot across its penultimate and final curses, ‘Dislumen’ and ‘Tabula’ respectively, combining to create 16 minutes almost of compelling, demented genius.

Black death cloaked in all its grubby glory.