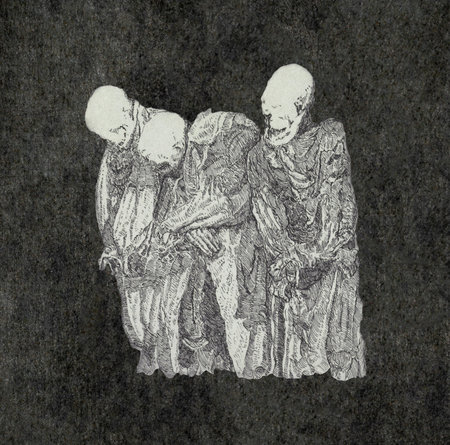 Ferocious vocals are one of the trusted staples of extreme music – or at least should be. The best Death Metal and Black Metal offerings invariably feature unintelligible demonic growls and / or diabolical utterances, unnerving emanations from contorted vocal cords which have become so commonplace that we’re almost desensitised to them. Blood-curdling howls, bellows and shrieks are the new norm and we wouldn’t have it any other way.

We settle into a comfort zone, where evil otherworldly verbal eruptions are par for the course, barely registering or raising an eyebrow anymore because this is what we’ve come to expect. And just when you think nothing can shock you, along comes Mylingar, ratcheting up the ante. Simply put, the vocals on ‘Döda Själar’ are inhuman. Inhumane. Ghastly. Monstrous. Sick. Sicker than that.

Even by Death Metal / Black Metal standards, we’re are on a whole nother level of diabolicalness here. Barbaric, fevered, unhinged, psychotic savagery befitting the times we live and die in. The wildest of wild animals screeching and hollering frantically into a microphone, expressing in unadulterated agony its torment and wrath; a cacophony of absolute nightmare. The devil’s work.

While it’s undoubtedly the horrifying, possessed vociferations that take centre stage on Mylingar’s second full-length, ferociousness, dread and revulsion lurk at every turn. Frenzied guitars and maniacal drumming shatter any sense of stability that might have resided in our minds hitherto, battering the senses in an avalanche of sheer terror and disgust. I’ve encountered an abundance of excellent Black / Death Metal but few records are as entirely, abjectly nihilist and devastating as this one.