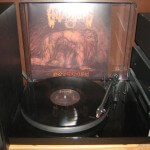 ‘Krypteia’ is Entartung’s debut full-length from two years ago and it has just been granted a vinyl incarnation by WTC (last month, I think) to coincide with the release of their follow-up album ‘Peccata Mortalia’. On this record, the German duo delivers six invocations (46 minutes) of melodic and somehow sorrowful Black Metal that might qualify as raw were the LP not so pristinely produced.

All in all, this is immaculate, highly-charged, emotional BM no doubt summoning the ancient spirit of the subgenre. There are no frills (to either the music or the actual record itself ((no lyrics or inlay but nice artwork…)), but there are also very few thrills to be had here.

Ultimately, ‘Krypteia’ is worthy of a listen (not least because you surely have different taste to me!) but at the same time it is unremarkable, harmless and a little too crisp, clean and accessible for my personal liking. Check it out and see what you think yourself…