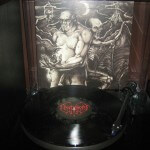 Regular readers will know that I’ve been keeping an eye on Fhoi Myore for quite some time, having previously given some time to their self-titled debut full-length and split with Pestiferum three and two years ago respectively. Thus, seeing as it is a vinyl release, ‘Les Limbes Pourpres / Mehxôhorr – Les IV Dimensions Cosmogoniques’ was always going to catch my attention.

This impressive split comes inside a luxurious gatefold jacket. No inserts or posters … instead the record gets straight to the fucking point! Uncomplicated, unsophisticated, unpretentious, in-your-face Black Metal rips through the speakers from both sides of the black wax.

There are no gimmicks here at all; just aggressive and pretty rapid-fire underground Black Metal for the most part, done the way it was supposed to be. Both artists excel and I have no hesitation in recommending this gruff and unapologetic record which comes with all the trimmings of a kick to the gonads. Speaking of which, scary cover…