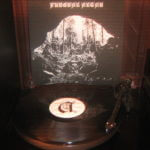 Funeral Altar’s self-titled first full-length album is great but, due to Skjold’s unpopular policy of limiting its releases to around half the number of hairs in an average eyebrow, chances are many people who want it won’t be able to get it. Which is a shame. I’m not sure what can be gained from setting limitations so far below anticipated demand – it certainly doesn’t benefit the consumer.

Having said that, I’m also unsure as to how much of said demand is false, i.e. generated by forces other than the quality of the music. If limitation was never disclosed, how many would still crave this music? Is there an artificial demand caused by the knowledge that the record is more valuable financially from the perspective of a prospective speculator? Are investors distorting the market?

Who the fuck knows anymore! Just how big is the worldwide audience for quality raw Black Metal? I have no idea. If 300 copies of this were pressed rather than 150, could the label lose money? I doubt it but who knows. Five-hundred might be a risk, especially if the hypefog dissipated. Fucking economics.

At the end of the day, labels can do what they want. But Skjold’s releases are hot as hell now so hopefully there’ll be some represses and an increase in pressing numbers soon. Although that would strip them of their mystique and indefinable appeal, to an extent, so don’t hold your breath.