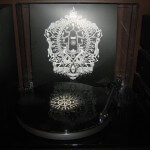 Genocide Shrines have most certainly hit the ground running on their debut full-length. ‘Manipura Imperial Deathevokovil: Scriptures Of Reversed Puraana Dharmurder’ is an astonishingly-accomplished body of work, a devastating Death (/Black?) Metal statement of intent that most scene veterans would struggle to match.

Sri Lanka is probably one of the last places on earth that I would have expected to give rise to such a masterful record. Having said that, when I visited the country a few years ago, two things struck me (apart from how fine the seafood was) – the cruel levels of poverty experienced by locals and how barely beyond puberty the soldiers toting massive machine guns at the airport in Colombo were – so I suppose it’s quite a fucked-up locale.

Anyhow, what we have here is 40 minutes of corrosive, militaristic, belligerent Death Metal in the vein of proven intercontinental warriors like Teitanblood, Witchrist and Revenge. This strain of relentless violent onslaught is obviously globally omnipresent now and Genocide Shrines smash it into the face as potently and debilitatingly as anybody else.

All told, ‘Manipura Imperial Deathevokovil: Scriptures Of Reversed Puraana Dharmurder’ is fantastic Death Metal, enhanced by some rather stunning tribal / ritualistic passages that perhaps nod tentatively in the direction of its exotic geographical origins.

Absolutely savage, in every possible way.