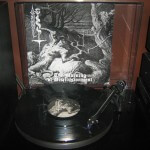 Originally released on CD three years ago, ‘The Morning Of Disillusionment’ is a demo (whatever that means any more) from German trio Grail, who share members with interesting young upstarts Shores of Ladon. The vinyl edition presents the 40-odd minutes within a classy package, which is widely available for a mere pittance (around €13).

Although far from exceptional, this is nonetheless a very good Black Metal record (including some cool samples), which I’ve given four or five spins already but may not revisit too often in the future.