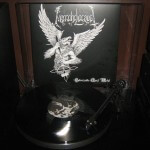 Necroholocaust have been knocking (priests) around for over a decade but have only recently got down to recording their debut full-length and I’m pleased to report that it is a true stonker. Albums like ‘Holocaustic Goat Metal’ bring a smile to my face; I can assure you that there’s not much in this world capable of achieving such a result.

These Canadians (who have baptised themselves Grimlord of Atomic Nuclear Hate, Black Plague of War and Disease, Bloodlust Abominator of Ritual War Incantations and Goat Plague Messiah) celebrate religious intolerance of the most proactive variety. The fifth track on the album, ‘Defile The House Of God’ encapsulates everything that’s so enjoyable about this kind of music (more Deicide than anything black; ergo a Death Metal album), with happy tidings of a Catholic congregation burning in the pews while priests and nuns are disembowelled on the altar. Proper order.

It’s one of those records where you derive a perverse and justifiable sense of satisfaction from reading along (the lyrics are included inside the tasty gatefold jacket) and I couldn’t help but notice that the drums sounds like a bastard priest having his stupid, vacant skull rightfully hopped off a coffin lid over and over and over again.