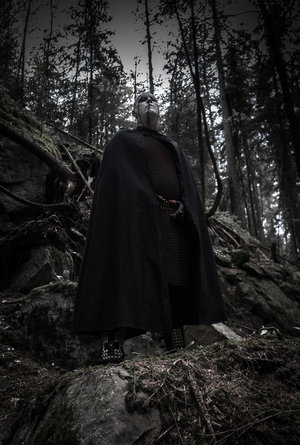 A quarter of a century on from their maiden recording, the expansive new Horna full-length, ‘Kuoleman Kirjo’, arrives as a welcome fillip in this ungodly era of pestilence and plague. With Horna’s enduring longevity and vitality representing an apt and timely reminder of the relentless onward march of time, I asked Shatraug – the founder and principal driving force behind one of Black Metal’s most influential hordes – how has he kept this cult relevant over all these years and where does the strength and devotion come from to continue walking resolutely, defiantly down the left hand path. We also discussed spectrums of death, erecting churches and the unbearable mental agony inflicted by draconian coronavirus restrictions.

Time waits for no man. It’s amazing how quickly our lives fly by, almost in a blur. You were a fresh-faced teenager when Horna’s demos, ‘Varjoissa’ and ‘Hiidentorni’, were released and had only turned 20 when the debut album, ‘Kohti Yhdeksän Nousua’, first saw the dark of night in 1998. Here we are now in the cruel year of 2020 and the tenth Horna LP, ‘Kuoleman Kirjo’, is imminent. Do you sometimes find yourself wondering where the hell did the time go?
“Oh, that happens sometimes but I do have quite a discography to remind myself I have not been idle all these years. It is still a wonder Horna has carried so far with me as the only goal I ever had was to one day release an album.”

Thus, when you initiated Horna, I take it that you didn’t dare to imagine that it would not only become a lifetime’s vocation but also that the band would develop into such an enduring and influential force, providing inspiration not alone to your compatriots but to a host of Black Metal brigades from all over the world? Considering that Black Metal is such an isolated, underground subgenre, the longevity and reach of Horna has been nothing short of remarkable. Does this fill you with pride or are you just doing the devil’s work?
“I take pride in my accomplishments, as one should, but ultimately I am serving the calling within me, channelling and challenging the forces which keep me inspired. I have never aimed at bringing out originality in terms of musical innovation but rather at keeping it well enough personal, from the heart, to a unique vision.”

How have you managed to keep Horna relevant? How do you continue to come back with renewed energy and vigour? A lot of bands start going through the motions as early as their second or third release and never recover but, if anything, Horna sounds positively reinvigorated on the new record. Have the numerous line-up changes perhaps played a part in keeping things fresh? Or ultimately is it just about writing great songs that are authentic and genuinely evil-sounding?
“I honestly don’t think about it, but a major factor in dealing out one deadly blow after another is never having forced anything to happen. Things take their time, stand the trial of self-judgement and what eventually is released is the prime creation. I write far more than ever gets recorded, it’s that process of creation that keeps me fuelled. Line-up changes always bring new challenges and possibilities, though less of a challenge with the current formation.” 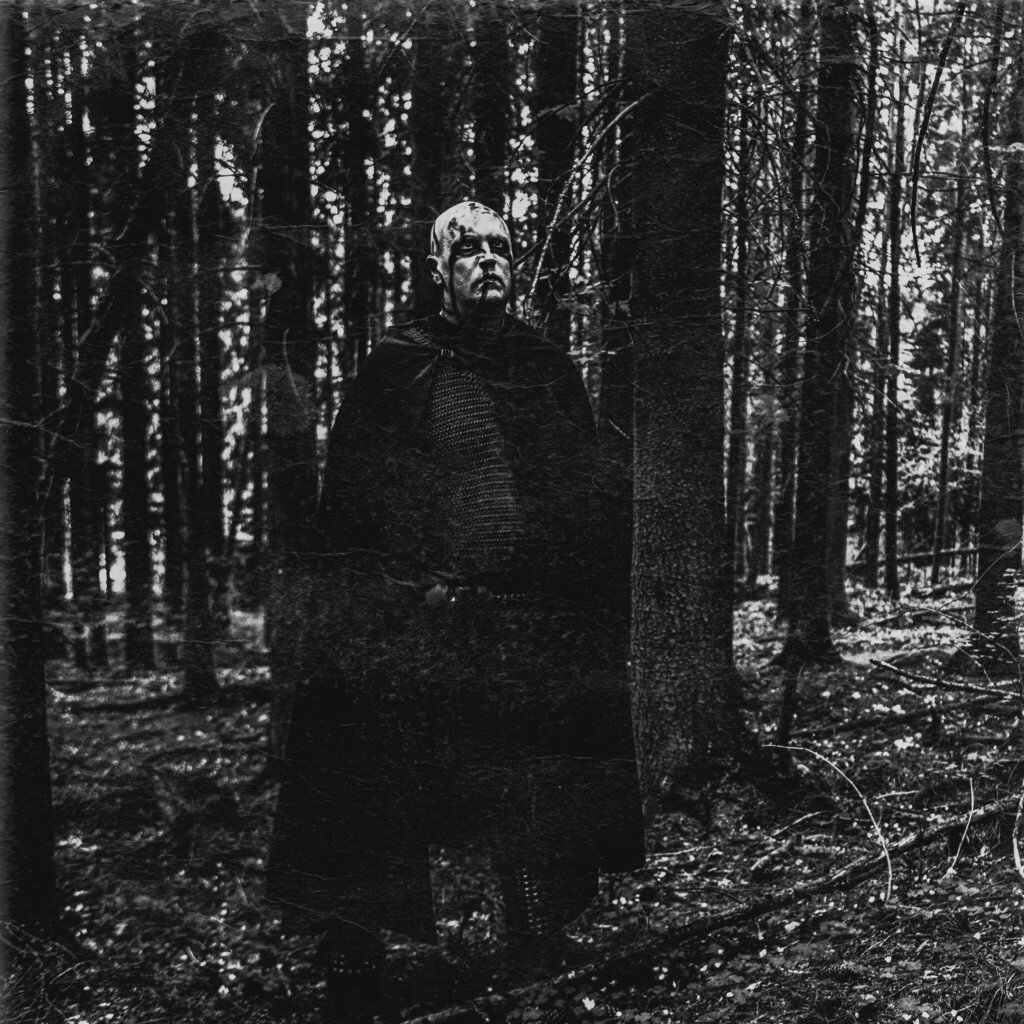 Part of the natural cycle of life is that, as we get older, circumstances can change and with them our priorities as new responsibilities emerge. With this in mind, how do the convictions of a teenage Satanist compare to those of a middle-aged one? Have you had to tame the wild beast in any way, to accommodate family or friends or society in general? Or, to the contrary, always aware of what path you were on and single-mindedly focussed on pursuing it, has your resolve strengthened with the passing of time?
“I’m certainly more pissed off than before but all that is a fairly refined form of hatred instead of blindly slashing out at everything possible in uncontrolled savagery. I haven’t had a change of heart since my youth, only growth and, even if it may be a middle-age cliché, learning from my mistakes. Everyone makes them, far too many keep on repeating instead of learning anything, though.”

Where does the personal strength and devotion come from to continue to walk resolutely down the left hand path and stick to your principles? I guess seeing such a soulless world around you, full of religious idiots, devoid of true spirit and intelligence, makes it a whole lot easier…
“It’s the spiritual conviction and even at the pain of striking resemblance, I may very well be one of these religious ‘idiots’, heh. Following a certain path does not mean to be blind and herded but rather it can be used as a fountain from which one may always refresh the inner fire.”

Speaking of a soulless world, who would have ever thought we’d end up living in times like those that have unfolded in 2020? All of a sudden, we’re like characters in a science fiction movie, existing (as opposed to living) in some Orwellian state of suspended animation. It’s utterly bizarre and unbelievable that vast swathes of the global population are being asked to put their lives on hold indefinitely. What do you make of all the madness (both the plague and the measures being enforced to counteract it) and how badly has it impacted both you personally and Horna? I know you should be preparing for a tour now in support of Belphegor and also for Steelfest (where instead of playing in front of a live audience you will perform your first and only-ever live stream on Halloween), while many other gigs and festival appearances have been cancelled – this must be severely head-wrecking?
“For me, the only difference is there are no live shows or tours, and no travel outside Finland, as a consequence of the prevailing restrictions and mania. The only thing I can’t fathom is how unjustly the same rules do not apply to everyone but, on one hand, it doesn’t come as much of a surprise that, where there is enough money involved, the rules bend. Those of us who are not motivated by earthly currency have to suffer from this the most and I truly miss being on stage. I can handle all the financial loss, but the mental agony is real.” 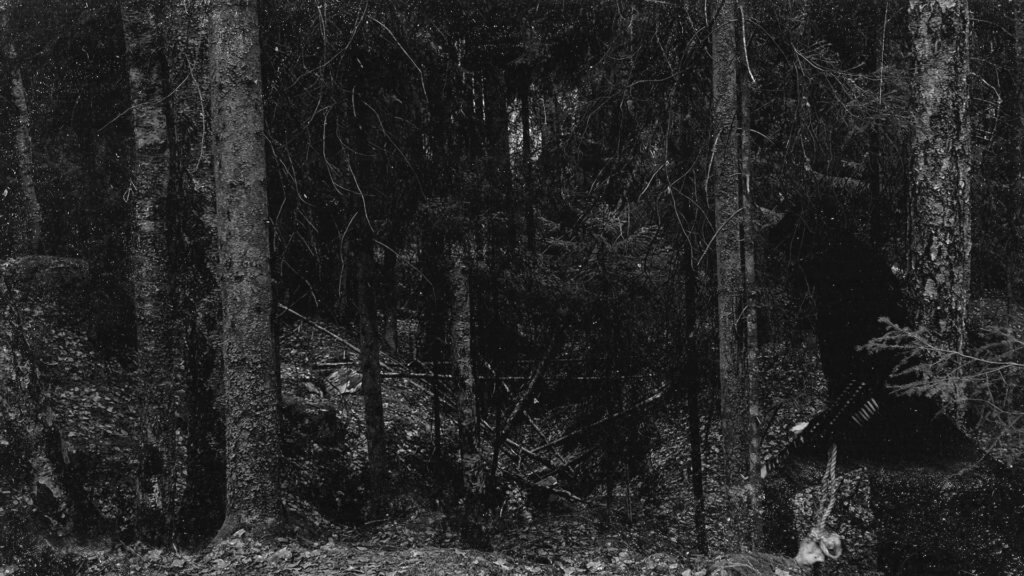 It seems obvious at this stage that this new and clearly dangerous virus is not anywhere close to being the indiscriminate killer we feared in March. It poses a severe threat to some people but the measures that have been introduced present almost as grave a danger to the welfare of others. I mean, it’s not good for anybody’s mental or physical health being under house arrest, living unnaturally and in fear, sitting at home depressed and eating too much, possibly unable to pay bills, self-esteem shot to shit, morale in the gutter. For musicians and anybody in the arts or entertainment game, the effects have been catastrophic. Do you feel that a more balanced approach should be adopted to dealing with the problem? Friedrich Nietzsche’s quote springs to mind: ‘whoever fights monsters should see to it that in the process he does not become a monster’…
“My point of view in this may seem quite a heartless one but I would’ve welcomed a mandatory exposure for everyone and all this would’ve been over and dealt with. Certainly, many lives would’ve been lost but I hold no life in more importance than another and this does not exclude myself or my family either. Many tragedies would have embraced us but, when the whole world seems to have lost sight of the bigger picture, how much more tragedy have we already faced and will we be facing than mere mourning? Humanity is its own biggest enemy and problem.”

Horna continues to perform exclusively in your native Finnish tongue. ‘Kuoleman Kirjo’ translates roughly as ‘the spectrum of death’. Assuming that translation is somewhat accurate, what specifically are you alluding to here? The various stages of death or different types of death (as in physical death, emotional death, spiritual death, intellectual death, etc.)? Something else?
“All the aspects of death and all that which beliefs, myths, practices and such have been associated with since the dawn of time, all laid out with the usual spiritual insight. And pure violence, the heart of human nature.” 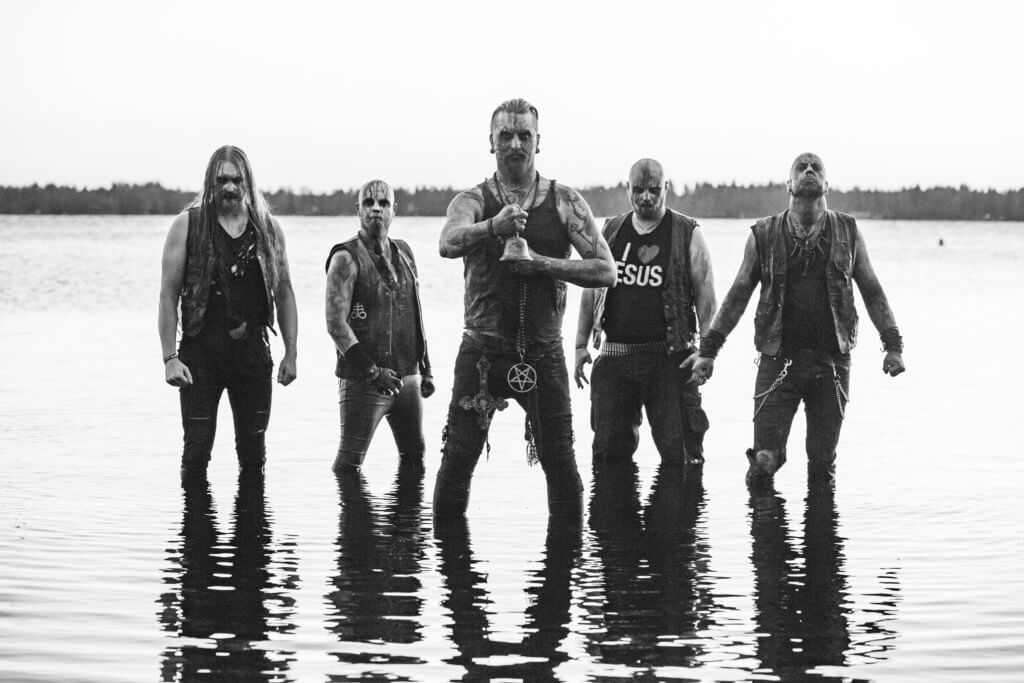 Playing with Google Translate a little longer, I noticed that ‘Haudattujen Tähtien Yönä’ and ‘Rakas Kuu’ translate as ‘On The Night Of The Buried Stars’ and ‘Dear Moon’ respectively. Are you making a nod to Lucifer, The Morning Star here or exploring cosmic themes? ‘Kärsimysten Katedraali’ (‘Cathedral Of Suffering’) is another one that jumps out at me … seems likely that you are ridiculing religion here, or is there something deeper going on?
“It’s become safe to say that ridiculing anything is a thing of the youthful past and so it is in this case as well. ‘Kärsimysten Katedraali’ is a vision of building our own church, from the bones and suffering of man, as violent as the crusades which brought us these religions that now prevail. ‘Haudattujen Tähtien Yönä’ is a nod to Lovecraft’s mythos and ‘Rakas Kuu’ is basically a love poem to the moon, the only witness to many a nocturnal thing.”

Ten albums in and you have produced perhaps the most ambitious album in Horna’s discography. Not only is ‘Kuoleman Kirjo’ a lengthy offering at 70 minutes but it’s also quite diverse, with some chanted / sung vocals and also, to my ear, a noticeably more transparent mix and production than its predecessor. Did these changes happen in an organic way or did you make a conscious decision to shake things up? Also, did you again handle all the song-writing duties yourself or did you allow others to contribute ideas? And finally, bearing in mind that this is your first recording using this line-up (which is well established through live gigs), how pleased are you with the performances of your acolytes?
“Originally ‘Kuoleman Kirjo’ was meant to be its first eight songs only and the remaining five were to be published as an EP sooner or later, but when we had finished and were listening to the final result everyone asked the same reasonable question and we chose to dive deeper into madness, making it a whole piece. This is also the first album I have co-written with Infection, or rather, he helped refine everything that I had pieced together, making the album as diverse as it is, with many elements I would never have thought of. I am very pleased with both the end result and the decisions taken that lead to it.” 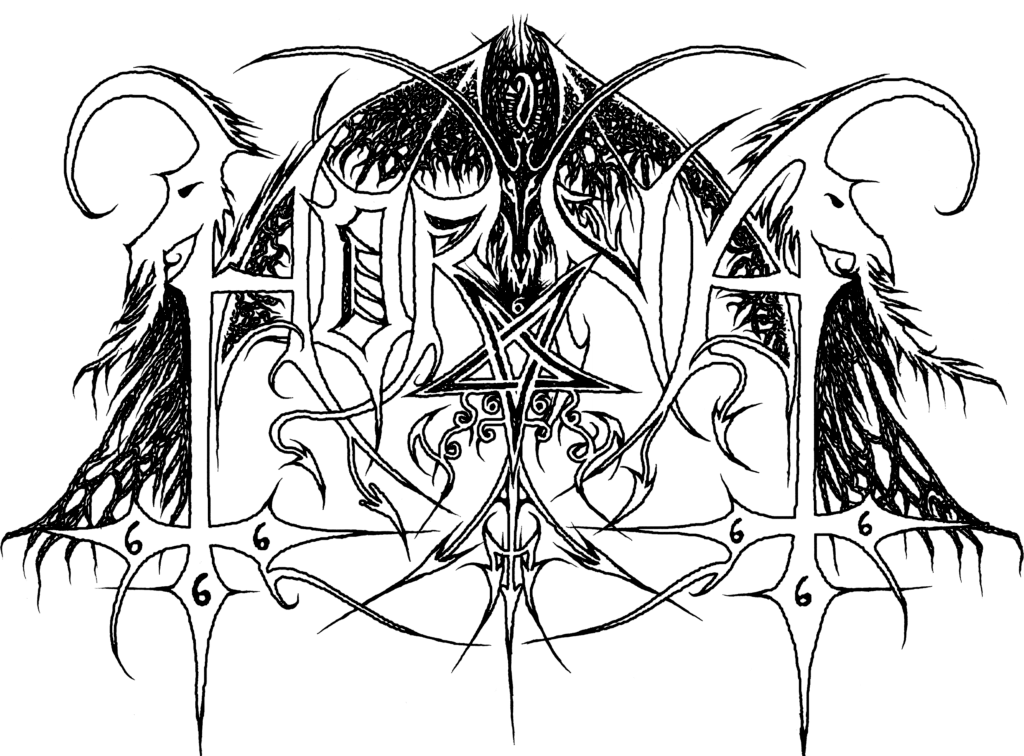