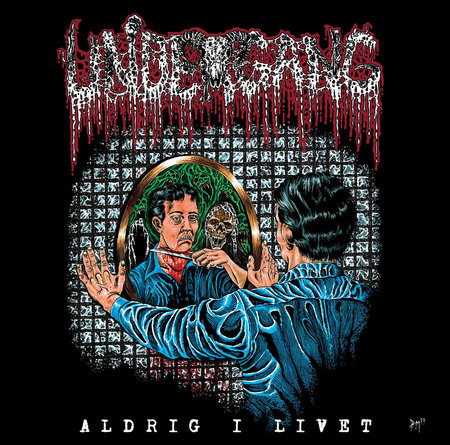 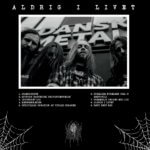 From the foulest sewers of Copenhagen arrives Undergang’s compellingly gross and captivating fifth full-length, ‘Aldrig I Livet’. A decade on already from their game-changing debut ‘Indhentet Af Døden’ and three years since their last album proper, the utterly mesmerising ‘Misantropologi’, Undergang return with a vengeance to prove that they retch forth putrid, gargling, choking, strangulated, downtuned, decapitated and disgusting Death Metal delirium like no other, each rotting, festering riff reeking of pure filth and decay.

Variety – of both mood and tempo – is the spice of Undergang’s death. At the core of a distasteful art attack that is lyrically and thematically gross yet – somewhat ironically – musically palatable, masterfully nuanced song-writing and an innate ability to merge raw, visceral, gory horror with more sombre and even enthralling moments lends ‘Aldrig I Livet’ an undeniable charm, like the good-looking corpse smiling gullibly at you before you whack it with a hammer in the face and slam down the coffin lid.

Yes, it’s gross and sick as we have come to expect, but I’m particularly partial to the band’s ability to execute imminently catchy songs, to conjure spellbinding, insidious atmospheres, the trippy disturbing creepiness of ‘Sygelige Nydelser (Del III) Emetofili’ being a case in point. The thoughtful deviation and attention to detail invested into each song would put many other Death Metal acts to shame, ‘Præfluidum’ proving a perfectly unsettling precursor to the sickness ahead, ‘Spontan Bakteriel’ a short, sharp and suitably spontaneous outbreak of bacterial disgustingness. The first visitation of ghastly, taunting doom appears on ‘Indtørret Lig’, where a scornful, slower, sickening section with decomposed, zombified vocals that could easily be coming from the dried corpse referred to in the song title.

And so it continues – one invigorating injection of insane pustulence after another, each embellished by s(l)ick, divergent and aromatic additives, the musical equivalent of desecrating a dead body. It’s truly uncanny how much variation and manifold flavours of regurgitation Undergang seamlessly spew into 32 minutes or so, their vigorous and macabre mantras all the while remaining organic and fresh thanks to a wonderful production.

Although I would readily endure much more of this, the brevity of the album perhaps helps ensure that the dastardly Danes don’t overstay their welcome as ‘Aldrig I Livet’ effortlessly holds the listener’s attention all the way through, all thrills and no fillers, Indeed, if anything, it gets better as it progresses, the closing triptych of the versatile, grinding, stomach-churning ‘Usømmelig Omgang Med Lig’ (put that one into Google Translate…) and the unsavoury, epic-by-Undergang standards, five-and-a-half-minute closer ‘Rødt Dødt Kød’ either side of the wicked, glorious title track (a tense and thrilling instrumental with tortured growls and gurgles sprayed over the top) making for the strongest of climaxes.