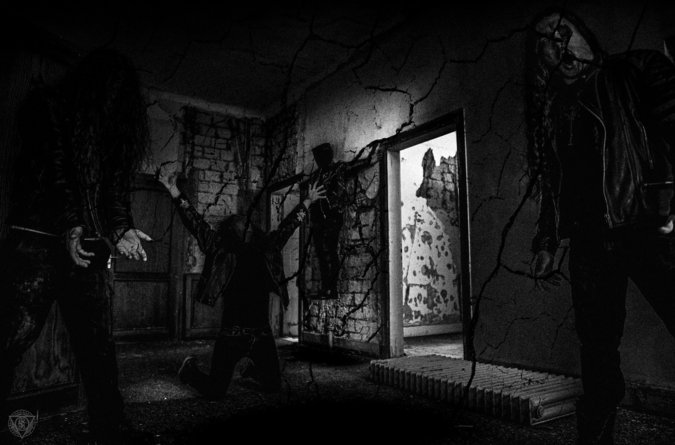 Void-gazing dimensional nomads Shrine Of Insanabilis have crafted two stellar albums of thought-provoking, illuminating, occult Black Metal. I contacted the vigilant, visionary Germans to discuss the apparent emptiness of everything, the unsolvable mysteries of reality, the deception of perception, where truth lies and the existence or otherwise of free will. 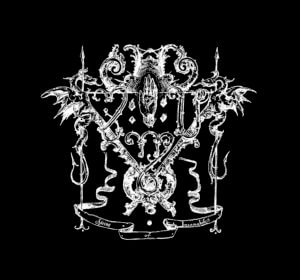 If Shrine Of Insanabilis are to be perceived as Disciples of the Void, to quote the title of your debut album, what void are we talking about? The void of space and infinity (“the widest void of endless space”)? The void of everyday existence? A vacuum of consciousness or intelligence? Seems to me there are more voids than physical substance in the known universe around us. Even thoughts and emotions could be interpreted as void-like?
“It would be a lie, if we’d say that the endless emptiness of the observable universe or beyond does not fascinate us. However, the Void in the title of our first album is not a place, but rather a status in which we fall into every now and then. A status and feeling of not being surrounded by anything. Distant to people and materials, even if they are close. As you’ve already mentioned, consciousness as well as the emotional parts which process the conscious and unconscious play a huge part in it. Depending on how much you can process the unconscious… Just like infinity and nothing, inner Void is a little difficult to describe and capture in words. With ‘Disciples Of The Void’, we can see the Void as the beginning and the end of a chapter in our lives. For Shrine of Insanabilis, it was definitely the beginning – an ascent from nowhere.”

In ‘Lusting After a Burning Star’ – the second song on your sophomore record ‘Vast Vortex Litanies’ – you refer to “that feeling of the absolute void transcending into eternity”. To my mind, this could relate to the nothingness and meaninglessness of everything we do / are – the futility of existence in the face of the merciless march of time. Each of us exists in a fleeting and ultimately fruitless moment in time. All our exploits will be either immediately insignificant or soon forgotten as we disappear, fade from memory and are replaced by other, equally pointless and ill-fated, deathbound beings.
“This line was written by our friend, Omega, who performed vocals on this song. But we talked of course about the contents of the song. What you write is certainly right. This insight is so obvious that it should be trivial. But mainly desperate poets, weird philosophers and metal artists write about it. Most people seem to ignore or accept it. Which still leaves the option, that maybe this is trivial and everyone is coping with it just fine. Just the aforementioned people are too hung up on it, to just do the same and make the most out of it. Memento mori is certainly a motivating factor, which should accompany that insight.”

Considering that we are mere specks in the vastness of time and space, is it therefore arrogant of man to assume a higher purpose or ordained sense of importance? To believe we are here for an essential reason? Or am I being unfair and ignorant – perhaps the quest for truth and meaning is in itself a valid purpose. After all, there will be no answers given if we don’t ask any questions…
“I really like that last sentence. Might quote or paraphrase it in future conversations. Aptly put. Indeed the pursuit of truth and self-fulfilment can be agnostic about higher purposes. The doing itself can be a truth in itself. The way the human body and psyche is formed, it might just be a superpower to unlock. When somebody can believe in a higher purpose, then more chemical and cognitive resources are available compared to someone who is questioning everything or just not believing in anything else. That is also something to keep in mind.” 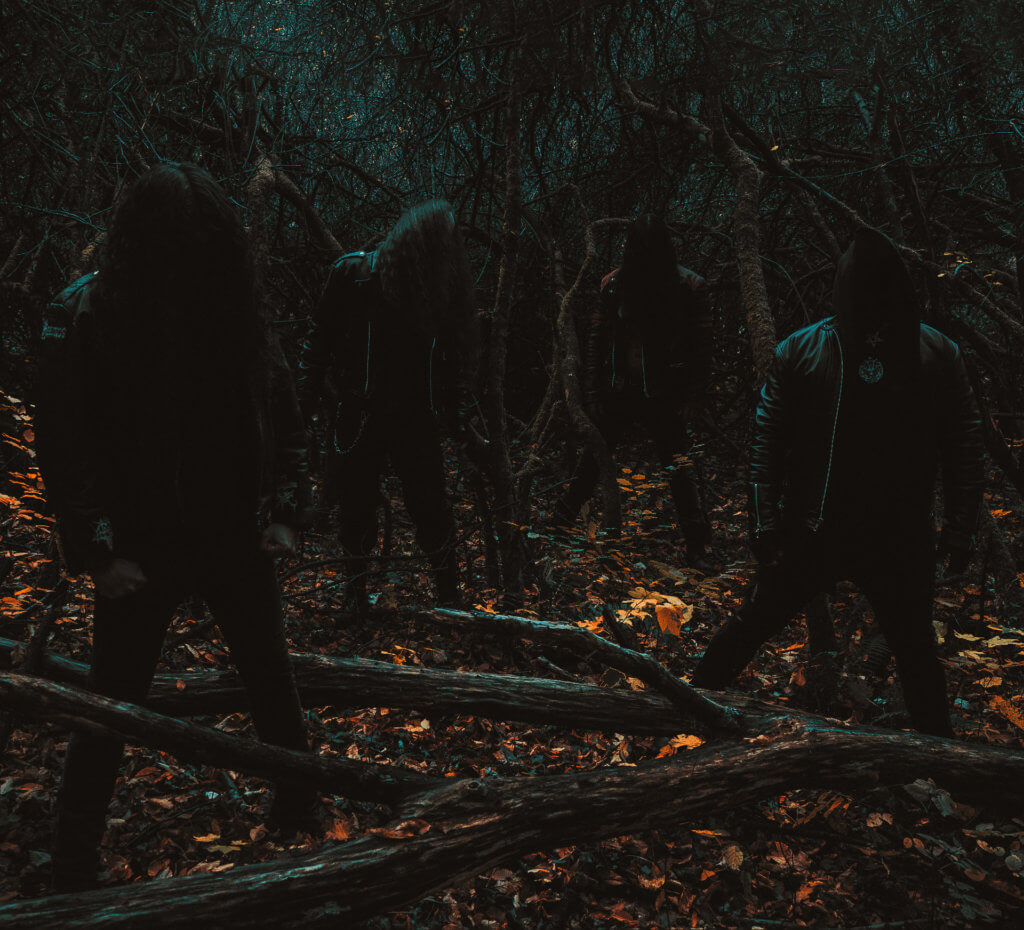 Yet, for all the enlightenment that one might seek or discover, the caveat is the ominous, inexorable approach of death – and almost certain nothingness in the wake of that ultimate leveller. Death awaits us all and has been even more prominent than usual in the public consciousness this year, for obvious reasons. It can be difficult if not impossible to accept this harsh reality – the inevitability that one day soon we will – each and every one of us – cease to exist and be no more. As you deduce during the course of delivering your ‘Verdict’: “no matter what you sow, death will reap its fruits; no matter what you left behind, any given trace will elapse into insignificance”.
“Death will deliver the final verdict. On you and anybody else you cherish. It is an integral part of the human experience thanks to our consciousness.”

Perhaps concluding that we have no true value or importance is a convenient truth for those of us with a negative predisposition. It’s not exactly uplifting to take such a nihilistic stance. What effects do you think such a resoundingly negative outlook can have on humans? Are we even seeking truth if we are instinctively grasping something that fits in with our own negative values? Can truth ever be found or are we like dogs chasing our own tails, destined for failure? Each person can have their own interpretation of truth … perhaps none of these are real?
“Maybe none and all of those are real at the same time. What makes them real? Everybody can form his own world with his convictions, perception and actions. Contradicting views and truths can all be real in that regard. Something that seems to become more and more absurd in our times. This is in conflict with the logic our minds create. And we are usually not capable of accepting or thinking about the possibilities of constructs we can’t grasp ourselves. Coming back to the first part of your statement: even if all of your outlooks are negative you gain nothing by just giving in to them. You can live them out, make monuments to your view – you can even stand against your biological programming and overcome that. But just doing nothing seems like the worst outcome in any way. If nothing matters for you, great, then take all the risks and try to burn brighter than anybody before.”

Can anything we think or ask or deduce be trusted if we don’t in fact exercise free will? All humans believe that they make conscious choices throughout their lives but some scientists have claimed that free will is an illusion created by the brain. If even free will does not exist, then what are we? Glorified sims? This is a classic case of the more I think, the less I know! Do you believe free will exists?
“That is one very interesting bastion in research. It was always an interesting field, because an organ is trying to understand itself. We have had some discussions about this: if free will can be proven through our scientific method, how trustworthy is that proof, given that it all stems from the one organ under scrutiny? Different views can apply here. But even if we should come to the conclusion that we have no free will, then trying to break free and tapping into a rebellious, adversarial spirit would always be a heroic story worthy of striving for. Maybe this topic will never be discussed enough, because the cognitive dissonance around it is too much for some – it simply is a too scary a thought to maintain. To a certain degree, it can’t be denied that we have less free will then most like to believe. Seeing the amount of people who impulsively grab such mundane stuff as chocolate or chips when they don’t really consciously want to…”

Is occult Black Metal the perfect vehicle for channelling such mysterious and dark thoughts? Would you say this is one of the purposes of Shrine Of Insanabilis? To explore the unknown and delve into darkness and mystique through music?
“We delve into the dark aspects of our creative energy for sure. Whatever can’t be grasped or has to be voiced might find a place there. The music is certainly fitting, because it can’t be grasped easily either.” 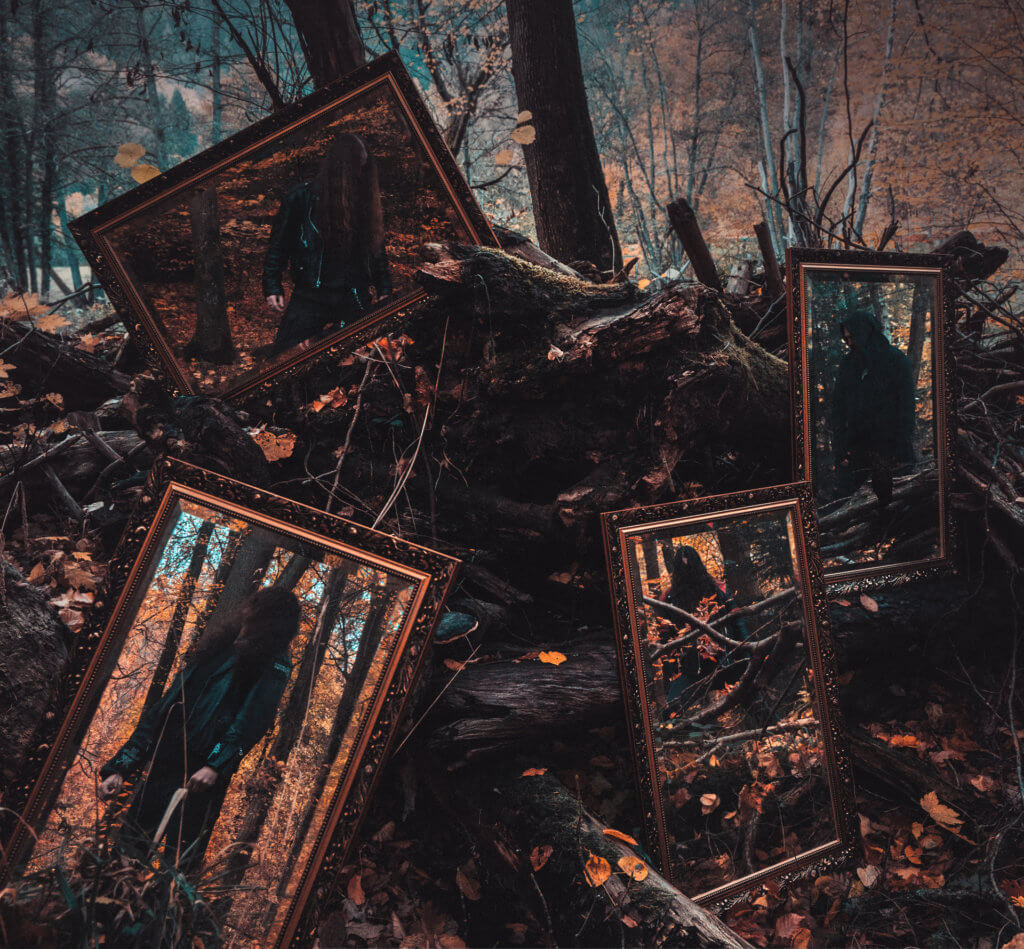 Live rituals have become an important part of the band’s essence. I guess this is where you really get to make your vision a reality? Within that context, 2020 has been something of a nightmare with so many major gigs and festivals cancelled. Well, all of them since March actually! How massive a blow has this been to Shrine Of Insanabilis? A lot of the gigs have of course been rescheduled, so fingers crossed there is some light at the end of the tunnel. It seems inconceivable that life will never return to normal, but what if it doesn’t?
“At the very least it is something we truly enjoy. But yes, playing the music with the energy of an audience, something that is happening just in that moment – as opposed to capturing the music for all eternity – is a very important role for us. We had a longer hiatus while we focused on the second album and were certainly looking forward to playing in Iceland again at the Ascension fest. But there’s nothing we can do about that now apart from wait. It might not return to ‘normal’, meaning as before. We humans are also very incompetent when it comes to judging possibilities which we haven’t lived or touched on in our life before. And nobody alive today experienced anything like this on this scale. Certainly none of the people in power. Given their age and position, they most certainly only experienced one thing: progress. Every decade their living standard has gotten better. Upward and progress. Not surprising that no one is equipped to deal with this and everyone is just improvising. We can’t know what it will be like when concerts come back. We just have to face it head on.”

During the course of the first wave of lockdowns and restrictions, a lot of bands went into creative mode. Were you able to conjure any new music during this time or were the stress / anxiety levels too high? Maybe stress and anxiety aren’t barriers to crafting Black Metal anyway… What frame of mind do you need to be in to compose / perform Shrine Of Insanabilis litanies?
“We were busy with multiple creative endeavours. Restrictions or extreme emotions can always be more of a catalyst for creativity than a hindrance to a point. It is hard to say what we require to write for Shrine of Insanabilis. Sometimes it happens by accident. Sometimes inspiration strikes and everything comes together nearly too easily. And other times it is just plain work – sitting down and connecting the dots of what is already there.”

At the end of the day, as long as there is music, life is not so bad. Regardless of how we got here – whether by accident or design (a pure fluke, surely?) – ultimately, we’re in a privileged position to have been granted life and should just try to make the most of it before the Grim Reaper’s scythe swings and the lights go out?
“Absolutely. As said before, dealing with the negative stuff is part of it. Getting it out in the open, using it for creative fuel to reach new heights in this short-lived experience seems like a foolproof plan for us. And if you dig too deep into your mind and are dead set that nothing matters, then fuck it even more! Be even bolder and burn brighter than you dare. Test your conviction that nothing matters. You might just be better off afterwards – or enjoy it.”