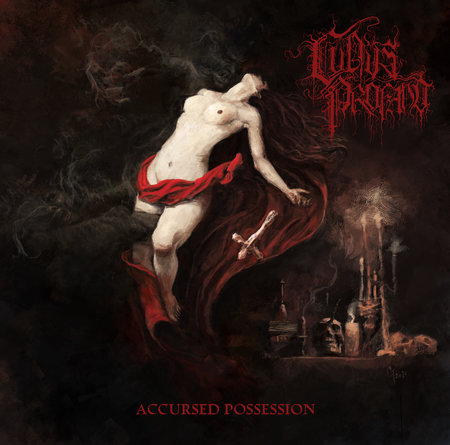 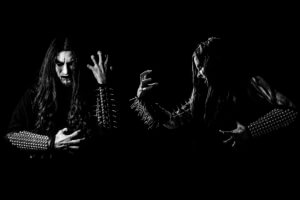 A truly evil and diabolical atmosphere prevails throughout Cultus Profano’s sinister sophomore full-length, ‘Accursed Possession’, which summons forth from the void seven insidious supplications to darkness, captured with the most disciplined dedication across 47 spellbindingly-hellacious minutes. Both in intent and form, the epic second invocation, ‘Devoted to the Black Horns, Op. 16’, perfectly encapsulates the inherent pitch blackness of this demonic duo, who irreverently ignited the black flame on their enticing debut, ‘Sacramentum Obscurus’, a couple of years ago and now hold it aloft, defiantly ablaze.

This track is the aural manifestation of Hell on earth, tapping into the cursed lineage of Black Metal’s most Satanic past to conjure nine minutes of predominantly, slow-paced, hypnotic art crafted and executed skilfully and with devotion, born along that infinite timeline where past and present collide. Though Los Angeles is geographically far-removed from Scandinavian shores, Black Metal recognises no borders – nor does inherent evil – and Cultus Profano plummet the same depths navigated by their Northern European brethren to mine grim, bewitching darkness, scorched by wickedness, seared by hellfire.

So adept are Advorsus and Strzyga at creating an unsettling and foreboding soundscape that they can confidently rein in the speed and aggression as befits the individual songs, for example maintaining a decidedly malevolent and unnerving presence during the slower, more atmosphere-reliant essence of ‘Tenebris Venit, Op. 23’, then seamlessly and effortlessly shifting to a comparatively frenzied and ferocious incarnation on the blistering final spell, ‘Crown of Hellfire, Op. 11’.

Channelling the spirit of established heinous hordes like Horna and Behexen, Cultus Profano have brazenly built upon the solid foundation provided by their impressive debut to deliver a formidable follow-up, the appropriately-titled ‘Accursed Possession’ a wretched representation of evil incarnate, bequeathed the mark of true darkness; a celebration of arcane, Satanic Black Metal and a funeral for the world.