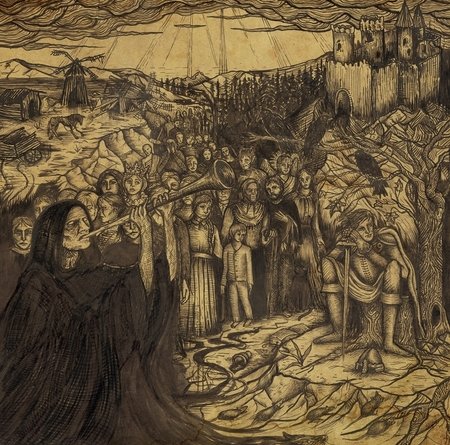 Without warning, unconventional Finnish duo Ordinance return with the follow-up to their truly eclectic 2014 debut full-length, ‘Relinquishment’, which was an odd but enjoyable treat and certainly not an album that followed prevailing trends or expectations. Unsurprisingly, the wonderfully-titled ‘In Purge There Is No Remission’ is an intriguing and unusual demonstration of Satanic Black Metal in its own right, presenting the listener with plenty to ponder and appreciate over the course of 50 adventurous and unorthodox minutes.

‘Obstructed Paths’ begins ominously then raises the black flame with menace, a chilling and varied contribution, twisting and turning, no need for a lyric sheet as the vocals are far from indistinguishable, the music accessible and melodic but nonetheless imbued with a subtle, surreptitious sense of darkness. While Ordinance play by their own rules, their singular strain of Black Metal does have some clear influences – Clandestine Blaze, Satyricon and Mgła, to name a few – though they without doubt put their own twist on things, some of the soaring, infectious guitar work on the multi-textured and -tempoed third track ‘Gathering Wraiths’ being a case in point.

The patient Finns are content to keep the pace economical for the most part, rather than trying to bludgeon in the name of the Horned One, delightfully crafting memorable and powerful tunes, never afraid to include lush melodies on even the occasional jarring Judas Priest scream or Motorhead riff. While Heavy Metal moments within Black Metal aren’t normally very appealing to me for some reason, Ordinance do it with style.

Putting together an album as ambitiously original (despite borrowing ideas from here, there and everywhere) as ‘In Purge There Is No Remission’ is high-risk stuff. Realistically, it should sink in its own piss. But to Ordinance’s credit they have somehow succeeded in delivering a distinctive and competent volume of work, the overly-melodic ‘Gesticulation Of Death’ quickly forgiven as – building to a frenzied, Armagedda-like crescendo – cascading eleven-minute epic ‘Purging Kremation’ closes the album out on a suitably evil, eerie and surreal note.