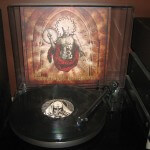 If Ignis Haereticum’s debut album ‘Luciferian Gnosis’ had appeared on one of the premier labels such as Terratur Possessions, World Terror Committee, Iron Bonehead Productions, Daemon Worship Productions or Fallen Empire Records, I would not have batted an eyelid. That’s perhaps as much a compliment as I could pay these impressive Colombians.

This is great Black Metal that could hold its own in any company despite the tired orthodox slant and the vinyl edition is contained within a spectacular gatefold housing with beautiful 16-page booklet included. One to investigate, for sure.