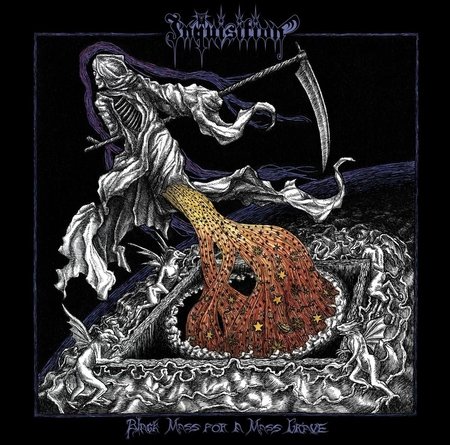 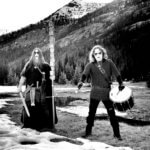 ‘Black Mass For A Mass Grave’ is a surprise on multiple levels. First of all, I presumed Inquisition had ceased to exist and didn’t notice any announcement anywhere that a new album was in the works (not that I was looking). So it has come as a bolt from the blue. And then there’s the music itself: again, very surprising.

While this is still instantly recognisable as Inquisition (or Immortal…), it is at the same time a dramatic departure from what has gone before. Dagon’s legendary reptilian / amphibian croaks have been toned down drastically. Although there’s still a dry, desert-like, serpentine tone to his delivery, it’s certainly different than what we have become accustomed to (particularly on ‘Extinction Of Darkness And Light’, which features some weird ‘singing’ for want of a better word).

The music itself is also far removed from what appeared on the previous seven full-lengths, with clear proggy influences, embedded in ‘60s psychedelia, fired by a rock or indie pulse and with not much in the way of traditional Black Metal or speed. Yet, somehow, Inquisition pull it off. Even though it’s stripped back, disassembled, bastardised beyond belief and uncannily melodious, ‘Black Mass For A Mass Grave’ is still a (fairly flamboyant) Black Metal album, albeit one with a huge twist or ten.

Sixty-five minutes of lush, mostly mid-paced, psychedelic Black Metal paying homage to Lucifer and the cosmos is a lot to digest in one sitting but we all seem to have a lot more time on our hands this year and, with winter closing in, this is an intriguing release worthy of investment. Some of the melodrama of yore had been replaced by an almost subdued strangeness yet there’s a definite darkness and also a sadness at the core of proceedings, as the uncharacteristically unsophisticated and straight-to-the-point album title suggests.