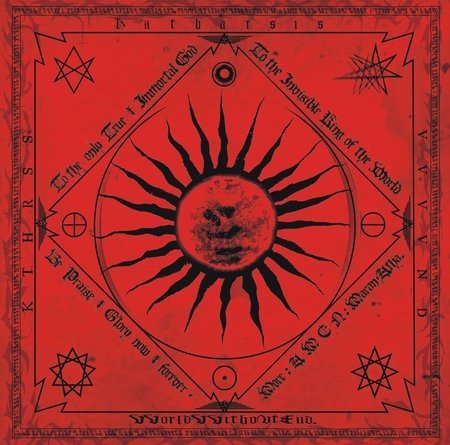 For obvious reasons it would be nigh on impossible to make any definitive judgment as to what constitutes the most evil Black Metal album ever recorded but one could certainly make a strong case for Katharsis’ incredibly sinister third full-length, ‘VVorldVVithoutEnd’, which first saw the dark of night back in 2006. The Germans had already proven themselves a malevolent, possessed force to be reckoned with on their previous recordings, but ‘VVorldVVithoutEnd’ would become their defining work – a perfect 52-minute manifestation of hideous, malign corruption that stands the test of time and all these years later will still send shivers down your spine.

Using the golden era of Darkthrone as their primary influence, but veering closer to the almighty Antaeus in terms of aggression, hatred and intent, Katharsis somehow managed to infuse their music with a negative and destructive energy that many bands could only dream of. I’m assuming this was a consequence of the genuine unhinged deviancy and devotion to darkness of the three co-conspirators, who were clearly charting the left hand path and meant every word. This album is unhinged and simply reeks of pure evil.

There’s too much so-called Black Metal created that is positive and upbeat, not just musically but also lyrically and thematically … many albums (and artists) come across as some sort of self-help book or aid to mystical, philosophical and inner enlightenment. All too often, the evil and misanthropic element, which is surely the most vital component of the subgenre, is overlooked or forgotten. Not so here. It feels like three men entered the studio and three demons exited, having conjured an abominable masterpiece of insidious, hellish, nightmarish torment.

All six curses on ‘VVorldVVithoutEnd’ are wondrous, with frenzied tremolo riffs and battering drums supplemented by the most obscene and haunted ghoulshrieking you could ever wish to hear. But special mention has to go to the two longest offerings, ‘VVytchdance’ and ‘VVorldVVithoutEnd’, which between them provide almost 28 minutes of mesmeric and absorbing primitive Black Metal art of the very highest calibre. The substantial and suitably malicious lyrics are also beautifully written. Again, reading these, it does feel like Drakh, Scorn and M.K. were being guided by and channelling every evil entity that has ever existed.

Evil incarnate. The curse lives on.