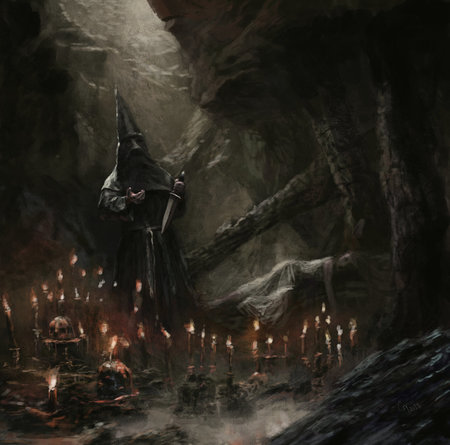 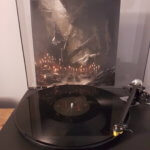 On their staggeringly-accomplished debut full-length, ‘De Ritualibus Et Sacrificiis Ad Serviendum Abysso’, Prison Of Mirrors have delivered 54 minutes of infernal, ritualistic, abyssal Black Metal, tenebrous and earthy, a swirling, dizzying and hypnotic declaration of adversarial splendour – mercurial, magnetic, majestic. The Italians crafted a captivating masterpiece of dissonant but spellbinding orthodoxy, odes to the evil one cast in servitude from beyond rotting graves; vast, elaborate and enduring the pleas and protestations from the blackness of the abyss.

Afforded a typically precise and organic production courtesy of the ever-vigilant Stephen Lockhart at Studio Emissary, who also released this sumptuous gatefold double-vinyl edition via his in-house label, Oration, ‘De Ritualibus Et Sacrificiis Ad Serviendum Abysso’ comes into its own on black wax, with one lengthy offering spread across each side. The Italians show themselves to be gifted writers and executioners – both lyrically and musically – while every facet of their dynamism and precision is afforded tremendous space in the mix, each detail shining through defiantly amid the sacrificial maelstrom.

The wondrous drums are a particularly prominent and pleasing feature, beating an incessant mantra across proceedings, while ambient interludes such as the choral section at the end of ‘Blaze Of The Ecstatic Liturgy’ and the sacrificial chants that interrupt ‘Sigils For The Ritual Exhumation’ succeed in elevating the overall atmosphere to a level of sheer ascendance. While the rapturous tremolo riffs, tortured shrieks and blasting drums create a dense and heavy atmosphere, a devilish melodicism underpins the entirety of the album, ensuring that it is both reassuring and repulsive at the same time. You know what they say about the devil having all the best tunes…

In the phantasmagorical form of ‘Ascending Through The Majesty Of The Dark Towers’, the decadent and delirious ‘De Ritualibus Et Sacrificiis Ad Serviendum Abysso’ is provided with the most fitting coup de grâce – a labyrinthine, intricate denouement that weaves its way serpent-like into the ear canal like a glorious amalgam of Deathspell Omega, Svartidauði, Emperor and perhaps even early The Ruins Of Beverast (but unquestionably with a distinct identity all of its own), ebbing and flowing with venom and guile through its copious 24-minute duration, coaxing this already-exhilarating journey to a suitably climactic and profane finale.