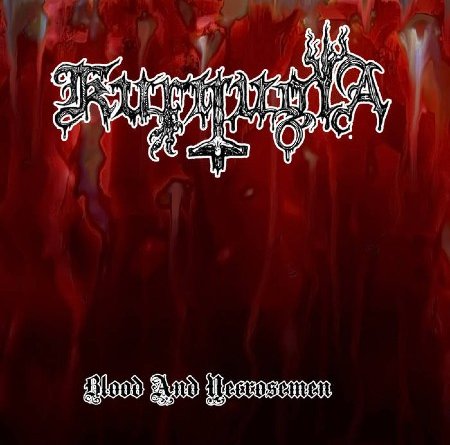 In less than 18 minutes, Kurnugia makes a complete mockery of the endless excretion of bland, derivative, uninspired and / or mind-numbingly boring rubbish masquerading as Black Metal these days. Honestly, more than 90% of the new releases appearing in 2021 are complete garbage, so it’s refreshing to stumble across an authentic, stripped-down and back-to-basics ejaculation like ‘Blood And Necrosemen’, pregnant with old school primitivism and conjured with barely-concealed contempt for modernity and polished sounds.

After recording three crude demos during the mid-1990s, Kurnugia – like Aske (which is also fronted by Behemoth) – went into a lengthy and seemingly-permanent hiatus, before returning like a sick, depraved corpse rising from the grave with these new perverted curses, driven by an undercurrent of misery and malice. If you are looking for songs in the traditional sense with melodies and an obvious beginning, middle and end and even a dollop of crowd-pleasing cleanliness, look elsewhere, perhaps in the direction of the dreadful new Ofermod full-length.

However, if unsophisticated, scornful and twisted sickness with a total disregard for convention or expectation is your thing, then ‘Blood And Necrosemen’ should go some way towards restoring your faith in the power of sonic darkness. The predominantly crawling pace and demented vocals combine to create an unnerving atmosphere and the deliberately rudimentary nature of proceedings flips a finger in the direction of the way more technical but soulless Black Metal which is all the rave today.

Black Metal was born of the underground but has become way too commercial and trendy and safe with the passing of time. It is a dubious commodity now and the spirit of old is either dying or being strangled. But the underground is still there, co-existing with the insufferable and inoffensive fare. (Well, it is highly offensive actually but you know what I mean…) With ‘Blood And Necrosemen’, Kurnugia pick up where they left off over 20 years ago, disregarding the path taken by those intent on reimagining, reinventing, reshaping and effectively destroying a subgenre that was perfect as it was, without the bells and whistles and progressive bullshit.

Bestial Burst and Narbentage Produktionen handled the CD and cassette releases respectively and a vinyl edition is imminent via the ever-dependable Final Agony Records.