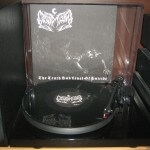 It’s been a decade since Wrest unleashed his debut full-length under the legendary Leviathan moniker and the sprawling ‘The Tenth Sub Level Of Suicide’ still sounds as epic and awesome today as it did back then. There’s very little I can write about this extraordinary album that hasn’t already been said or written but it is no exaggeration to say that ‘TTSLOS’ stands as one of the most important BM releases ever and that Leviathan hereon single-handedly (literally) redefined what Black Metal was, is and could be.

In terms of delivering harrowing, crude, disturbing, guttural, spectral, dynamic, harsh yet sumptuously melodic Black Metal, Leviathan arguably has no equal. I missed acquiring this landmark release on record first time around so was pleased to learn of Funeral Industries’ spate of Leviathan reissues.

My only grievance about an otherwise magnificent release is that this is essentially a rather basic gatefold double-record with no inlays or lyrics or any such cosmetics. This is a tad disappointing seeing as lyrics were included with the original Moribund CD edition and I believe the label could perhaps have done a little more to make this already extra-special album even more collectable. Still mandatory, though, even without any frills.