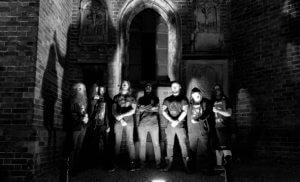 Opening atrocity ‘Dissolution of Consciousness’ is a suitably seething maelstrom of chaos and carnage from Ireland’s heaving heavyweights of unrestrained dissonance and disarray, levelling all within range, pulverising the very ether itself and raining down twisted, tormented bedlam in an inimitable, disjointed, unhinged, disparate ejaculation of discordance that can only be Malthusian. If that sentence fucked you up, then you will probably understand what troubles me once you’ve given this ten-minute assault upon (sense and) the senses a listen.

Mercurial, magisterial and mightily ominous, Malthusian are a law unto themselves, emitting seemingly freeform sonic madness that lacks orthodox structure and linearity but somehow succeeds in tantalising, cajoling and enrapturing the shellshocked, awe-struck and frankly confused listener. If anything, Malthusian’s second contribution to ‘Time’s Withering Shadow’ – the aptly-titled ‘Delirium’, chugging corrosively and backwards-sidewards towards the eleven-minute mark – is an even stronger offering, imbued with a primordial atmosphere of dread and decadence, a disgusting display of fevered black death bordering on insanity yet clearly a work of warped, depraved genius. Timeless and awash with potent pandemonium, this puissant, intoxicating pair of indiscriminate onslaughts is easily on a par with anything Malthusian recorded previously – and that’s saying something.

Even though they are ostensibly a collaborative effort, it’s difficult not to view splits as a direct face-off between the acts concerned and the power and might of Malthusian certainly seems to leave Suffering Hour facing into a futile mission to match their peers from across the Atlantic. Well, rather amazingly, the American deliverers of dissonance in turn retort with a worthy riposte, reverberating sonic shards and angular hooks from an array of unlikely vantages and viewpoints, beginning with the manic instrumental ‘Crawling Embers’, which could form part of the soundtrack to a fucked-up Lynchian nightmare not yet conceived into existence.

‘Temporal Lapse’ is the main Suffering Hour submission at the altar of disharmony, again a decidedly experimental excursion and with barely-perceptible vocal utterances sometimes buried so far beneath the surface and into the background that I’m genuinely not sure they are there at all. Spectral and sordid but showcasing frightening musicality, it’s like the bastard offspring of Sinmara, Black Cilice and Ennio Morricone – a smorgasbord of one-dimensional / multi-dimensional lunacy pouring forth with vigour and vibrancy from the very void itself. Concluding with a thoroughly-legitimate cover of ‘Reserection’, which was originally recorded by death rock pioneers Mighty Sphincter (with whom I remain wholly unfamiliar), Suffering Hour stand toe to toe with Malthusian all the way on this exceptional split slugfest from the bowels of the festering underground.