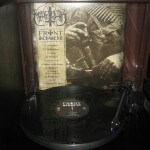 Twenty-five years in, Marduk unleash their 13th full-length and the fifth of the Mortuus-on-vocals era – easily the most accomplished period in the Swedes’ blistering recording history. Returning here to the killing fields of WWII, they’re a real force to be reckoned with now and a rare example of a Black Metal band signed to a major label who don’t also happen to be shit.

‘Frontschwein’ translates loosely as ‘front swine’ and is a colloquial term the Germans coined for the hapless, cannon-fodder soldiers / pigs in the frontline of battle, where they are unceremoniously killed, maimed, butchered, splattered, smashed, exploded, obliterated, pulverised, hammered and fucked to pieces. That’s what this record will do to your speakers.

Hardly the underground’s best-kept secret, in fairness, so I’ll keep this one short and sweet. Suffice to say, Marduk live up to their big-guns status and everything about this record is as one would expect from such seasoned campaigners (apart from the fact that the bonus track is not included on the vinyl edition). A marked improvement on this anyway.