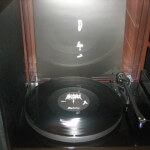 While still as lo-fi, ghoulish and ghastly as ever, Black Cilice’s third full-length isn’t quite as ferocious and vociferous as the previous two albums. For want of a better word, it is more spectral. ‘Mysteries’ is still grim and raw Black Metal of the deepest underground, treading the same astral plains as its predecessors, but less chaotic in its execution.

The subtle shift in delivery is most welcome because – irrespective of how great ‘A Corpse, A Temple’ and ‘Summoning The Night’ (and, to a lesser extent, ‘Old Curses’) are – Black Cilice was nevertheless in danger of becoming perceived as a one-trick pony, re-recording essentially the same album over and over again (but what an album!).

Once more, we get six tracks (38 minutes), and I believe it might be a(nother) vinyl-only release (for the time being, at least). The artwork is pretty much identical to the first-two records, except the fucker on the cover has moved a little bit, so it would appear that this guy never leaves his dungeon.

Although there was absolutely nothing wrong with the first two LPs, the slightly-tweaked, more restrained and stylised incarnation of Black Cilice evident here is thoroughly enjoyable and serves to underline the Portuguese one-man act’s relevance in a scene that can stagnate, frustrate and disappoint all too often.