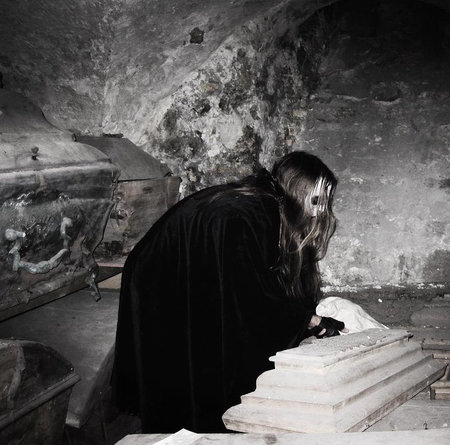 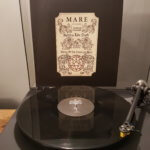 An essential document for those who cherish ritualistic, occult Black Metal, this release collates the two iconic, trailblazing EPs which established Mare as one of the underground’s most unique and essential forces. Initially unleased by the legendary Nordkult Rituals, ‘Throne Of The Thirteenth Witch’ first saw the dark of night as a 7” record in 2007, when Nidrosian Black Metal was still an unscratchable itch on Satan’s scrotum, while ‘Spheres Like Death’ followed three years later.

Here, the seven curses are collated across both sides of a 12” LP, which is presented in a classy gatefold sleeve, within a slipcase cover, featuring new artwork and a double-sided poster. Really, Terratur pulled out all the stops and this edition reeks of pure, unadulterated quality. The materials used and the attention to detail treat this landmark music with the respect it merits and the record itself – remixed and remastered – sounds perfect in every way.

Comprising four decadent death hymns, ‘Spheres Like Death’ is stretched across Side A, delivering almost 21 minutes of hypnotic, entrancing Black Metal – ceremonial, sick and hauntingly evil. It’s clear to see why Mare became perhaps the most celebrated Nidrosian horde before they had even released a full-length! A genuine sense of dread and downright malevolence can be detected throughout and listening to this masterpiece is as close as most of us are going to get to participating in a sacrificial rite.

By comparison, ‘Throne Of The Thirteenth Witch’ is even rawer and noticeably more primitive, but nevertheless imbued with the same eerie, life-draining atmosphere, the darkness suffocating, the music ritualistic, evocative and unsettling. While there’s a contrast between the two sides sonically, the same corrupt and deviant spirit permeates all seven spells, the chilling use of keyboards adding an element of sheer horror to the sacrilegious offerings of this pack of unhallowed miscreants from Trondheim, on the outskirts of Hell.