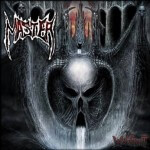 The Ego has noticed that when I appraise albums by what one might construe as bigger bands, my  blog receives more hits. More people want to read about your Watains, Burzums and Satyricons – acts that I should probably ignore – than your Necrostrigises, Wulkanazes and Antediluviums (or should that be Antediluvia?). The Ego – always making demands – dictated that I should check out the latest Master album – and slate it! – simply to attract more traffic to BlackMetalReviews. The Ego is a cunt. He is a different entity to (the) me, if some of what I read is to be believed.

Anyway, I effectively gave up on Master after they released their second album, ‘On The Seventh Day God Created … Master’, which I didn’t much like. Really enjoyed their eponymous debut, though – but that was released 23 years ago! I have since ignored Paul Speckmann and co. to such an extent that I didn’t even realise Master still existed as a going concern. I am astounded to discover that ‘The Witchhunt’ is in fact their twelfth full-length.

My rather simplistic take of Death Metal these days is that there are some fantastic new, fresh and vibrant bands breathing life into a scene stagnated by the presence of far too many over-the-hill, washed-up, stale has-beens. I was prepared to lump Master into the latter category … but then I listened to the album properly. ‘The Witchhunt’ – replete with great sick vocals – is surprisingly good; it is old school, of course, but the bottom line is that this – though far from mandatory – is a much better release than I’d been anticipating. So I can’t hammer it after all.