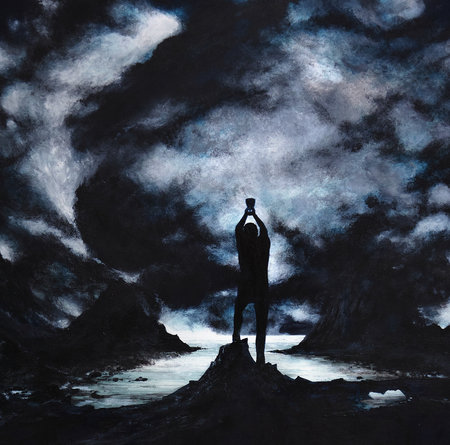 As one of the highest peaks of Icelandic Black Metal, Misþyrming’s stellar debut album ‘Söngvar Elds Og Óreiðu’ was always going to be a tough act to follow. However, unsurprisingly, ‘Algleymi’ has managed to work the oracle, representing another magnificent release from D.G. and co., which has managed to deliver in spades the quality for which the band is rightly regarded, tellingly without retreading old(-ish) ground.

I’m assuming it would have been a walk in the park for Misþyrming to create a second album that was almost identical to the first. And it’s safe to say that travelling down that rather obvious path would have more than satisfied the legions who were blown away by the breakthrough record. Thus, the redoubtable Reykjavíkian rabble deserve immense kudos for pushing the longship out somewhat to deliver a follow-up full-length with an identity all of its own.

Compared to the equally-brilliant ‘Söngvar Elds Og Óreiðu’, ‘Algleymi’ is bolder, brasher, more polished, catchier and more memorable, definitely more accessible. It possesses too a much more modern sound and has cast aside much of the rawness of yore.

At first, the sudden, unexpected reinvention of such a fledgling faction came as quite a jolt but, having had ample time to digest the newer songs and the good fortune to enjoy them in a live setting – where this material really comes into its own – I can state without fear of contradiction that Misþyrming have produced another masterpiece, albeit far from identical to their original offering.

The more things change and all that.