Black Metal Reviews
May 31, 2021May 31, 2021 Gerald Robinson End All Life Productions, Oration, As Blades In The Firmament, Monte Penumbra 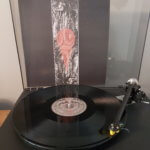 Ostensibly a Portuguese-Icelandic alliance thanks to the involvement of one Bjarni Einarsson on drums and Stephen Lockhart (drum recording / mixing / mastering / co-releasing), Monte Penumbra is a different beast than hitherto on unconventional, unpredictable and tantalisingly-intangible sophomore full-length, ‘As Blades In The Firmament’, where oppressive darkness and swirling chaos merge with calculated sonic indifference to conjure a smorgasbord of suffocating disorder and disarray.

A murky and convoluted maelstrom of tenebrous eclecticism, ‘Black Mould on Rye Grass’ provides a fitting opening gambit before the ghastly, haunting refrains of ‘To Anoint the Dead’ bathe the ether in a surge of unhinged, fevered mania, its disembodied spirit accentuated by Einarsson’s restless and untamed drum patterns, which beat a spontaneous tattoo all over ‘As Blades In The Firmament’, elevating the album to a place it would perhaps otherwise have never reached.

The rolling, orphaned, improvised (except, not, of course…) drums on the title track itself represent a gift to the senses, blending seamlessly with W.uR’s protesting strings and forlorn howls of despair to create a truly unnerving, unsettling experience – the equivalent of hurtling along on a sonic rollercoaster, perhaps. The murk and opprobrium in evidence is neither overwhelming nor monotonous, however, as intermittent shades of nuance and variation render this record an imminently palpable listen.

Climaxing in the spiralling eleven-minute ‘Trephining the Severed Head of the Oracle’, initially awash with jagged shards and icy dissonance before transforming into a parting blast of cosmic radiance, ‘As Blades In The Firmament’ at times feels almost haphazard, disjointed and close to implosion, but the structural stubbornness and apparent lack of coherence are the result of an inverted sense of discipline that make this work a successful exercise in manipulating and directing chaos to evoke dread and disorientation.