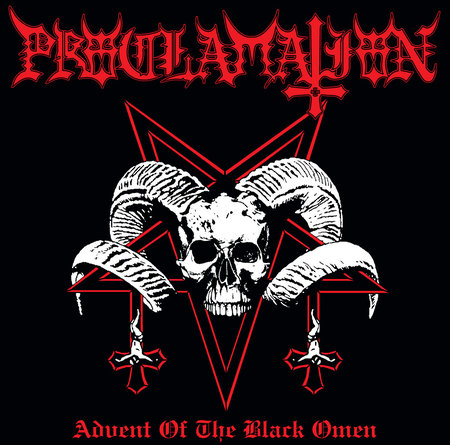 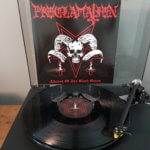 During a decade of decadence, defunct bestial Iberian warmongers Proclamation unleashed four monstrous full-lengths, all of which were re-released on vinyl format towards the latter stages of 2020. ‘Advent Of The Black Omen’ was the blasphemous horde’s debut album, originally inflicted upon the pitiful masses 15 years ago this month. While it’s not necessarily Proclamation’s best release, it is perhaps the most significant.

The Spaniards have much in common with Canadian trailblazers Blasphemy and Conqueror, their Finnish counterparts Beherit and Archgoat and the likes of Black Witchery and Diocletian. Essentially, this is barbaric and violent Black / Death Metal that’s about as compromising as a steel-booted kick in the teeth. Although these reference points provide an accurate and indisputable indication as to what manner of destruction we can expect, it must be stressed that Proclamation were never mere imitators but deserve to be remembered as important subgenre leaders and pioneers in their own right.

‘Advent Of The Black Omen’ is raw and harsh, aggressive and savage, utterly relentless in its onslaught. The riffs buzz along almost mechanically and are barely audible behind the heft of the insane, omnipresent drumming and sick, twisted, ferocious vocals. There’s nowhere to hide from the bombardment of savagery, although the inclusion of some clever moments of restraint should allow the victim to draw breath temporarily before the next barrage of blows and kicks reins down.

While music doesn’t really come much less sophisticated than this, there is nevertheless a measure of skill and precision to the crudeness as well as sheer hostility. The evil atmosphere vomited forth – almost literally – at the start of ‘Seed Of The Antichrist’, for example, is masterfully conjured. As a point of interest, the hideous vocals on ‘Advent Of The Black Omen’ are administered by none other than Reverend of Goetic Rituals, Commander of 72 Evil Spirits himself, better known as Teitanblood mastermind NSK.

For these vinyl reissues, all the stops were pulled out – gatefold jackets, large posters, inserts with lyrics. Worthy of a place in any record collection, in my opinion.