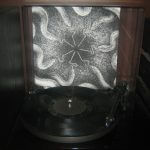 ‘Melek Taus’ collates a slew of demos and EPs recorded by antipodean wraiths Moon during the course of 2008. It was initially issued on cassette in 2012 but was given a painfully-limited vinyl makeover by buzz label of the moment Skjold towards the death rattle / last seeping fart of 2016 anno bastard.

There are more than 90 minutes of ambient, eerie, raw Black Metal to be trawled through here and most of it – apart from a really ropy start to Side C that possibly adds to the underground credo but nonetheless represents utter turtle shit – is superb. Long since s(kj)old out, alas, but there’s bound to be a second pressing.