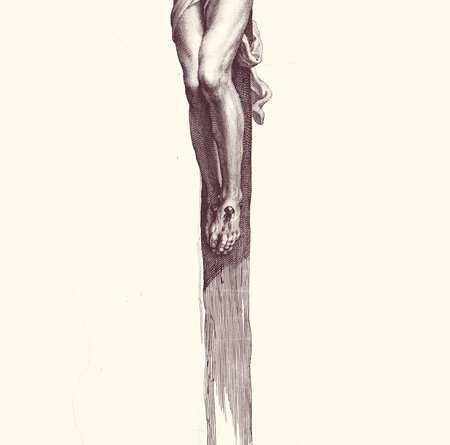 The way Black Metal has been stagnating, frustrating and infuriating in recent times, it was almost with a sense of trepidation that I approached the new Mortuus full-length, which arrived unexpectedly without any prior notice. Was another revered band about to shit all over its own legacy? Fret not as ‘Diablerie’ is just as mandatory as anything else the morbid death-worshipping Swedish duo has recorded hitherto.

Okay, the new album is not going to achieve the same legendary, iconic, immortal status as the rightly-celebrated ‘De Contemplanda Morte; De Reverencie Laboribus ac Adorationis’ or indeed its stellar successor, ‘Grape of the Vine’ – that’s just the way things are – but there can be no doubting that ‘Diablerie’ is both a worthy recording in its own right and at the same time a legitimate addendum to the extended Mortuus discography.

True to form, the music here is bleak and oppressive, four lengthy, predominantly-slow-to-mid-paced lamentations forced out resentfully with a generous helping of grim misanthropy and abject despair, culminating in almost 44 minutes of acute spiritual suffering. The impenetrable darkness delivered is palpable, ‘Diablerie’ one of those hideous, distressing listening experiences that demands to be followed by a long shower and perhaps the purchase of a self-help book or even the exploration of a new philosophy.

As they soil your very soul, the dark offerings are suffocating and demoralising, yet amid the futility and all-consuming negativity are seeds of … something rewarding. This is a masterful recording, from the amalgam of high-energy intensity and stark desolation that is ‘Threefold Harrowing of Hell’ through to the final nail in the coffin, ‘Furnace of Sleep’ – epic in a way but stubbornly cold and cruel.

The title track is haunting and unwelcoming, the aggressive passages disconcerting, rage evident at every turn, the insidious melodies offering no comfort whatsoever. If this is atmospheric Black Metal, then that atmosphere is one of utter corruption. If it’s orthodox Black Metal, then it remains unorthodox by its very nature. The fact that ‘Diablerie’ is an elusive album of twisted paradoxes is epitomised rather astutely in the excellent song title ‘In Graves Remote Even the Worthless Have a Meaning’ – another thing of appropriately sickening beauty.

The darkest nightmare put to music; there is no light here.