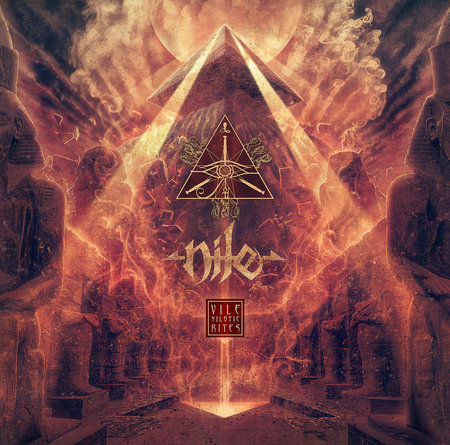 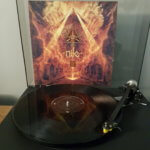 When it comes to Nile, a short review is never going to even touch the surface of what one of their albums offers. Indeed, it would require a painstakingly-crafted thesis to do justice to their enormous ninth full-length, ‘Vile Nilotic Rites’. However, despite the fact that the ludicrous lockdown of humanity has me holed up like a myxomatosis-infected rabbit with more free time on my hands than I ever dared to imagine, I possess neither the energy, wherewithal nor longevity to compose a text that is befitting this Death Metal masterpiece.

Blasting off ominously with the portentous, poignant ‘Long Shadows Of Dread’ – a track befitting the times we live (I use the word lightly) in, speculating that perhaps the Ancient Egyptians must have sensed the imminent, inexorable demise of their civilisation, ‘Vile Nilotic Rites’ takes us on a wondrous, expansive journey across nine stunning compositions and some 55 minutes, culminating in ‘We Are Cursed’ – the bleakest of concepts, inspired by a detoured Uber ride mastermind Karl Sanders took back to Cairo from visiting the Abusir Pyramids, where he witnessed mind-boggling poverty and human suffering juxtaposed against the outline of the downtown Cairo skyline, which led him to ask how could such misery exist in close proximity to comfort and how could a once advanced civilisation like Egypt end up producing squalor on this scale. Perhaps the human race is cursed, fated to always suffer and languish in filth.

There’s so much here to get your eyes, ears and mind around. Buffeted by the extensive liner notes that have become an essential component of the Nile album experience, where Karl provides in-depth, educational and entertaining insight into the ideas behind every song, this is not just a musical trip. It’s educational and enlightening. These liner notes are akin to a collection of short stories, rendering the whole experience eminently more rewarding than the vast majority of Death Metal records / bands.

Of course, Nile have been delivering for a long, long time now and have perfected their Egyptian-mythology-obsessed art. It’s been a score of years since ‘Black Seeds Of Vengeance’ confirmed that jaw-dropping debut LP ‘Amongst the Catacombs Of Nephren-Ka’ was the beginning of a very unique story. Through line-up changes and undoubted strife, founder and driving force Sanders and his acolytes have stuck at it, refusing to let their enthusiasm and passion be quelled, rather remarkably producing in ‘Vile Nilotic Rites’ an album that could well represent their finest hour.

The thought and attention to detail that goes into the placement of every word, riff and drum blast is incredible, the trademark Nile brutal, technical Death Metal complemented with more experimental passages (particularly in the vocal department) than presented by the band previously as we devour tales of cultural, historical genocide, the debauchery and perversion of Marc Antony, war and decay, astronomy and astrology, stargazing, time travel, magic, etc., etc.

By any standards, ‘Vile Nilotic Rites’ represents an awe-inspiring, fascinating journey through ancient worlds of intrigue, mystery, punishing Death Metal coupled with lyrics and concepts that really get the battered old brain cells sparking. None of this is a chore. It’s a pleasure; never more so than on the eight-minute epic, ‘The Imperishable Stars Are Sickened’, where the plausible (as ever) theory is that perhaps, armed with before-its-time high tech, the Ancient Egyptians may have deduced that the phenomenon of retreating stars – caused by the expansion of the universe – was in fact a consequence of the celestial gods becoming so sick of the behaviour of humanity that they opted to turn their backs on us in disgust.

As Karl asks: can we really blame them? Here is the wrathful sky.