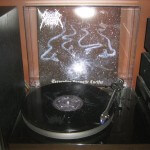 Canadian clusterfuckers Nuclearhammer share a member with Adversarial and their logo was drawn by the guitarist / vocalist from Antediluvian, with whom they once collaborated on a three-way split. This information should give you a very clear indication as to what to expect from their second full-length ‘Serpentine Hermetic Lucifer’, a chaotic 45-minute offering which appears some five years after their ‘Obliteration Ritual’ debut (which I haven’t heard).

Think pneumatic drills rather than guitars; grating metal rather than vocals; sledgehammers smashing off galvanised steel more so than drums; more mace than bass. A man of my age shouldn’t derive any satisfaction whatsoever from such an unmerciful racket. But this is truly fantastic life-affirming stuff. Bestial, necro Black Death at its finest.

A sublime gatefold jacket with lyric sheet and poster seals the deal. But cursed fuck on that dumb etching on Side D.