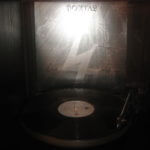 As well as elevating them above their peers, the thick primordial rumble evident on previous Portal releases was a key component of what made them so mesmerising. Granted, there was always suspicion as to what the murk was hiding – were Portal actually any use or did they just have a unique sound?

To me, it mattered not. The inherent atmosphere and horror of a record is what counts. The vibe. I’m not at all concerned with how technically proficient the music is. Portal’s glorious racket sounded amazing. To an extent, the songs were indistinguishable from one another, but I would have been happy if they just stuck to the same winning formula ad nauseum.

Thar’s what I assumed they’d do. I was surprised, therefore, when I heard that the impenetrable murk was lifted on ‘ION’, which has been granted a much clearer production, allowing rare access to the intricacies of what is going on. And any contention that Portal is a mere gimmick has been well and truly shattered as we can now bear witness to a an extraordinary Death Metal masterpiece in all its glory. Although not as indecipherable, indigestible and difficult to fathom as those that preceded it, Portal’s fifth full-length is every bit as insane.

No longer sounding like they record their reverberations at the bottom of an erupting volcano, Portal are now the aural equivalent of a clean, precise, meticulously-sterilised, glistening, sharp medical tool slicing through your face (as opposed to being hit repeatedly by a sack of hammers).

The emperor’s clothes are gone and turns out he’s got a huge cock.