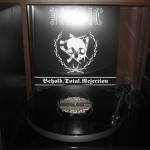 Revenge return with a – dare I say it? – vengeance. Fifth full-length ‘Behold.Total.Rejection’ is their longest album to date, breaking from the tradition of offering eight songs and instead delivering ten, and it is also their most insane, by quite some distance.

Even by Revenge standards, this is fucking way out there. Like the soundtrack to a massacre in an abattoir, with the beasts themselves playing the music, ‘Behold.Total.Rejection’ ups the ante big time and takes things to a whole new level of extremity. I love when bands do that; it shows that they have really meant it all along.

The first time I listened to this record I couldn’t believe how totally mental it sounded. But by now I have become accustomed to the madness that abounds hereon and I would without hesitation herald ‘Behold.Total.Rejection’ as one of the most mandatory records I’ve ever had the pleasure of spinning.

It’s a relentless, challenging and even exhausting listen due to the utter savagery and speed of the songs. But fuck me sideways if it isn’t divine.