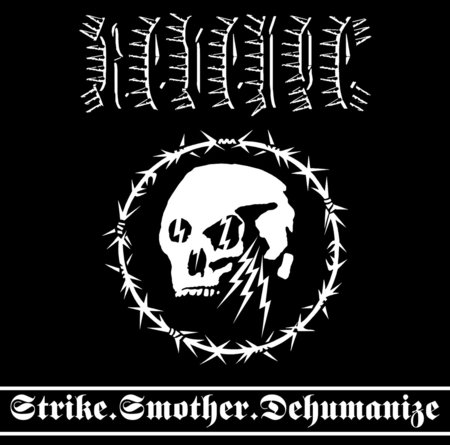 The world is a steaming, overflowing sewer and Revenge are here to remind us all with their blistering, contempt-filled sixth full-length, ‘Strike.Smother.Dehumanize’. The uncompromising Canadian duo took things to the nth level on their previous album – the barbaric-beyond-belief ‘Behold.Total.Rejection’ – five years ago and this latest obscene offering is a worthy successor to that utterly-essential, hate-fuelled onslaught.

If the state of the world fills you with disgust and rage, there’s no point making any attempt to hide your fury. And Revenge are clearly not ones for niceties. Everything about ‘Strike.Smother.Dehumanize’ reeks of rage and violent retribution against the scum. Cut them down with a sword, hang them up with a noose, impale, crush, smother the enemy. With the madness and wild abandon of soon-to-be-slaughtered animals in an abattoir, Revenge – one of the most pulverising forces recording music today – are coming white-knuckled and hate-eyed looking for blood.

Refusing to relent for even a second, ‘Strike.Smother.Dehumanize’ is the sound of a boot stepping on a human face, forever. Let there be no curiosity, the future is here and it’s an even worse nightmare than predicted. Sharpen your blades.