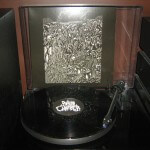 Ritual Chamber’s opening shot is just shy of half an hour long and is officially considered by Numinas to be a mere demo. Well, for a demo, ‘The Pits Of Tentacled Screams’ is nothing short of sensational.

Indeed, even considered as an actual pro release in its own right, it is also utterly superb and can stand toe to toe with anything.

Everything about this MLP is magnificent. A ghastly slab of dreamy, oftentimes doomy, ancient-spirited Death Metal and gnarl that singles RC out as an act to follow with intent going forward.

It’s quite astonishing when you think about it: regardless of what genre or subgenre that guides his muse at any particular moment in time (Funeral Doom, Black, Death…), this artistic chameleon just seems to nail it every time.

Debut full-length ‘Obscurations (To Feast On The Seraphim)’ has just been launched in 2LP format and I will undoubtedly offer my humble opinion on that one in due course. Unless I die first. Which might be no harm.