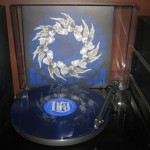 ‘De Praestigiis Angelorum’ is the debut full-length from Black Metal ensemble VI, veterans of the French scene with previous experience ripping off faces in bands like Antaeus and Aosoth, to name a couple. Unsurprisingly, they have hit the ground running.

This nice-looking record – which comes in a gatefold jacket with lyrics included (en Français) – is like a 200kmph car crash between Deathspell Omega and Fell Voices; blistering and dexterous as all fuck, but imbued with just enough nuance and melody to keep things interesting.

The first five or six times I listened to ‘De Praestigiis Angelorum’, I thought it was a good-to-decent effort, no more than that. Having persevered for a change, the rewards are bountiful. Superb stuff, despite my continued reservations about the befuddlingly-quizzical lyrical message of the orthodox movement.