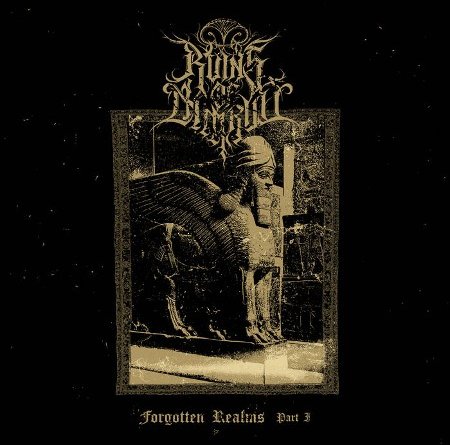 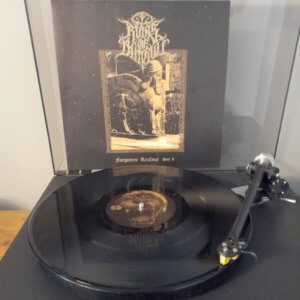 Dwelling very much in the land of noisy, raw Black Metal, ‘Forgotten Realms Part I’ is technically a demo, apparently, although it’s difficult to distinguish between demos and actual albums proper when dealing with lo-fi music that hisses almost indiscernibly in and out of ear’s reach, disguised hideously in reverb and hidden behind a seemingly non-existent production.

Think Black Metal made by wasps inside a kettle recorded onto a tape recorder in an adjoining room and that should give some indication of the level of madness emitted by Ruins of Nimrud. It’s the kind of tenebrous, murky, obfuscated barely-there-at-all Black Metal many went mad for during the infamous days of Skjold and other limited-edition-and-false-demand-creating boutique labels. I can’t remember their names off the top of my head; some still exist.

Anyway, Black Gangrene releases a lot of this strain of noisy Black Metal, which is very much indebted to the fizzing phantasmagorical, ghostly sound of Black Cilice. While the whole lo-fi raw Black Metal thing has been done to death and becomes tiresome at times, this record is a fantastic example of how powerful it can be when executed properly.

There’s an urgency and frenzied intensity to ‘Forgotten Realms Part I’ – which is a throwback to the tape-trading days of three decades ago – and the noisy non-production certainly adds to the underground atmosphere. A dungeon-synth-y moment in the middle of the twelve-minute second track showcases a strong ability to craft ambience to complement the racket. Indeed, there are strong melodies swirling all around the place, albeit buried in a chaotic cacophony.