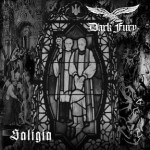 Within the space of 33 minutes, Dark Fury make their feelings on all things Catholic well and truly known. These seven songs stand proud as an all-out attack on organised religion, tearing into priests and Christian ethics like nails ripping through the flesh of ‘the chosen one’. Lyrically, the Poles rant with venom about the greed, hypocrisy, perversity and corruption of the church as they see it. All very entertaining stuff and hard to argue with the general sentiments expressed. Somehow it seems all the more potent coming from the same country that gave the world Pope John Paul II…

Musically, it’s pretty sandard Slavonic Black Metal, leaning towards the early 90s, executed at mid-to-high pace, but with some slower passages, such as on the excellent third track ‘Luxuria’, which also contains the sounds of weeping, defiled victims of the church’s wicked ways. While there’s nothing particularly original about either the sound or the themes to be found on here, ‘Salagia’ is nonetheless a really enjoyable listen, enhanced greatly by the aforementioned cries of the repressed or the mock laughter evident towards the end of the ensuing song, ‘Invidia’. These little touches – sound effects or samples – break up the monotony just enough to elevate the album above the norm.

The CD’s gambit – ‘Superbia’ – sets the tone brilliantly for a well-composed ride, with thundering drums, shrill guitars and some nice varied vocals. While a lot of anti-Christian artists tend to go over the top with the explicit nature of their message, I found Dark Fury’s approach to be more thoughtful but no less restrained, emphasising the greed of the priests (who come back again and again looking for more of our money) and the stupidity of the masses (who believe that giving money to the church can buy them a ticket into heaven). As it says on the inlay: “While listening to this album, mock the hypocrisy of all christians, both the priests and the faithful.” Enough said.