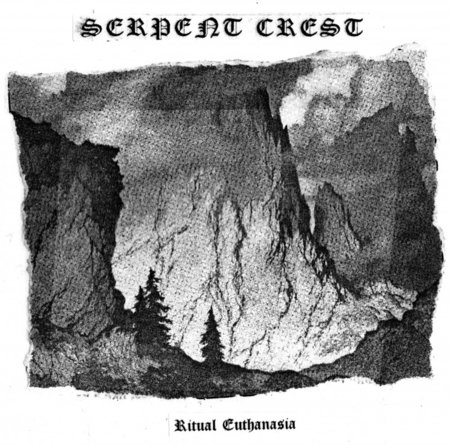 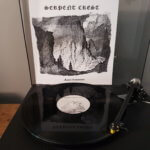 From the deepest crevices of the underground, Dutch trio Serpent Crest puke out some weird, uncompromising, primitive, raw Black Metal on their debut full-length, ‘Ritual Euthanasia’, which breaks the lengthy silence since their cult 2012 demos ‘Freedom Disappeared From The World’ and ‘And Whose Ashes Still Glow’. Certainly, whatever appeal those demo tapes of eight years hitherto possessed, there’s no danger of that charm being lost along the way through enhanced sound as this release contains no production values whatsoever, which leaves me at times feeling like I am the one being euthanased.

The deranged, unhinged nature of things reveals itself as early as the maddening second track, ‘Healing Us From Contamination’, with its bizarre, drunken sung / shouted vocals, coming across like the rawest, bleakest Urfaust, recorded live in one take, using the cheapest equipment, in the middle of an ancient forest or crumbling castle.

Again, at the end of the record, on ‘The SS Dancers’ and ‘Eagle Above The Death Arch’, proceedings again take a rather unexpected turn as we veer closer to 80s alternative pop / goth / indie territory like Spear Of Destiny, Echo And The Bunnymen or Sisters Of Mercy than Mayhem or Burzum, the delightful instrumental ‘Freedom Disappeared From The World’ another one offering respite from the raw, unprocessed Black Metal madness evident elsewhere.

The album sounds spontaneous and improvised, effectively tapping into the distant atmosphere that’s so integral to raw underground Black Metal, a combination of guitars so fuzzy they barely exist, kitchen-appliance drums and wretched vocals conjuring a decidedly uncomfortable atmosphere. Although very much of the raw, noisy and analogue variety, bordering on bedroom Black Metal, ‘Ritual Euthanasia’ is highly recommended to those with a penchant for the rawest, fucked-up-est, most-inaccessible blackness imaginable or bearable.