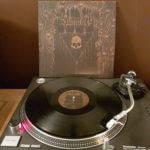 Summon’s debut album, ‘Parazv Il Zilittv’, is a pitch-black, disturbing ode to death and demise, a swirling, deranged cacophony of prime Black / Death Metal that is as captivating and uplifting as it is bleak and harrowing.

The Portuguese trio duly deliver 41 minutes of oftentimes slow-to-mid-paced ultra death worship that sounds like it was recorded in an asylum, prison, torture chamber, crematorium or perhaps the train station at the end of the world.

The bleak messages are powerfully conveyed over the course of nine brilliantly-composed and –executed ritualistic homilies (two without words) and it’s all as professionally and perfectly presented as we have come to expect from a meticulous, trailblazing label. Incredibly, this sublime slice of subterranean suffering can be yours for just €15.